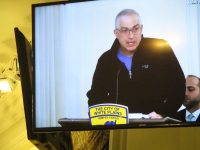 Alan Himmelstein, president of the North Street Area Civic Association, addressed the White Plains Common Council on April 1 during the public hearing on a plan for 303 apartments at 1133 Westchester Ave.

The White Plains Common Council voted unanimously on April 1 to close the public hearing on a proposal from a development partnership to create more than 300 apartments at 1133 Westchester Ave.

The joint venture of the NRP Group and the RPW Group is proposing to create the housing in the same complex that already has a commercial area which includes a day care center and other businesses.

The developers are seeking a zoning map amendment and site plan approval from the Common Council to overlay the Planned Campus Development District on the site.

There would be one, two and three bedroom apartments spread through the three proposed apartment buildings. An outdoor swimming pool and fitness center are part of the plan.

The partners hope to begin construction in 2020.

Councilwoman Milagros Lecuona said she wanted city officials to research how many trees should replace the trees that would be taken down by the developer. In addition, the city needs to have an idea about what will happen in terms of further development on other properties on the “Platinum Mile,” she said.

The one resident who participated in last week’s public hearing was Alan Himmelstein, president of the North Street Area Civic Association. A Master Plan for the zoning should be created by the city. “A clear master plan everyone can look at” is needed, he said.

The Association wants to better understand the benefits to the city of the zoning map amendment, including how much additional tax revenue would be generated by the project, Himmelstein said. He thanked the developers for their willingness to meet with the Association,

A date when the application would be back on a Common Council meeting agenda was not announced last week.