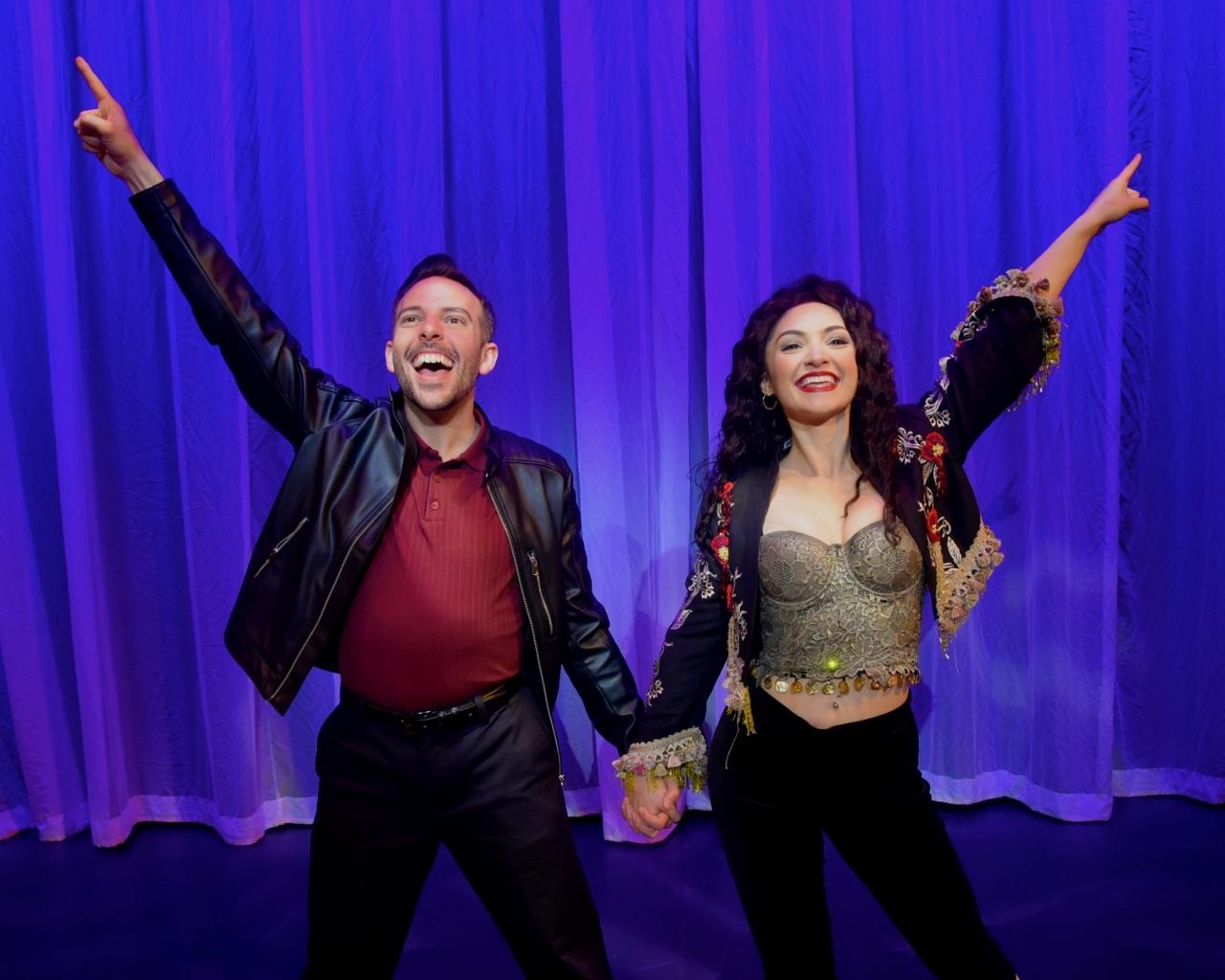 Jose Luaces and Maria Bilbao as Emilio and Gloria Estefan in the Westchester Broadway Theatre production of “On Your Feet,” that will be shown now through Aug. 4.

It’s easy to imagine that the latest production at the Westchester Broadway Theatre (WBT) would be a rousing, exciting one simply by hearing the title, “On Your Feet.”

Learning it is the biography of singer Gloria Estefan and the Miami Sound Machine, it’s an assured a good time. Running now through Aug. 4, this is the perfect family-oriented, summer entertainment show for audiences of all ages.

Based on the lives of the Grammy Award-winning husband-and-wife team Gloria and Emilio Estefan, the story starts with their humble beginnings in Cuba, with each family starting a new life in the United States. Gloria’s family fled Cuba when she was a child and settled in Miami where her mother cared for her and her younger sister while their dad went off to the Vietnam War.

Coming fairly close to covering Gloria’s real-life biography, WBT always manages to capture the essence of any storyline they present on stage. It’s impressive how the set designers can switch from lush Miami scenery, complete with palm trees and ornate fountain, to the family’s kitchen, offices of record producers and numerous other settings, with a seemingly blink of an eye. Even the bus crash scene that severely injured Gloria, and was covered extensively in the news at the time, was effectively done, wowing with its creativity of such an event.

The cast is large for this production and they are all full energy, with a 10-piece band on hand, giving the show its big band feel and Latin musical flavor. The dance numbers and choreography are spectacular and the music is contagious, bringing back the songs that catapulted Gloria and the Miami Sound Machine into Grammy history.

Despite Emilio and Gloria’s arrival in the States without many resources, their families survived the upheaval. They met when Gloria was 17 and their combined talents enabled them to break through all barriers to become a crossover sensation at the top of the pop music world.

This production follows their rise to fame through raw talent and perseverance. From international superstardom to life-threatening tragedy, “On Your Feet” takes you behind the music and inside the real story of this record-making and groundbreaking couple who, in the face of adversity, landed on their feet.

The story is based on an original book by Alexander Dinelaris. The show is directed and choreographed by Donna Drake, with musical direction by Bob Bray. The production features one of the most inspiring stories in music history and includes the iconic hits “Get on Your Feet,” “Don’t Want To Lose You Now,” “1-2-3” and “Coming Out of the Dark.”

The show’s star, Maria Bilbao, as Gloria Estefan, convincingly makes the audience feel as if they were watching a flashback into the life of the real Gloria. It’s easy to see why the multi-talented Bilbao was chosen to star in this production.

Westchester Broadway Theatre is located at 1 Broadway Plaza in Elmsford. Tickets range from $59 to $89, plus tax, for dinner and the show depending on the time and date of the performance. For tickets and information, call 914-592-2222.

Also check the website for ongoing special offers at www.broadwaytheatre.com.