Skip to content
SPORTS
November 16, 2021November 17, 2021 Examiner Media volleyball
We are part of The Trust Project

Following the third game of its Class A state regional volleyball final, WALTER PANAS was down, 2-1, against Section 9 champion, Cornwall.

The Panthers were facing a premature conclusion to their outstanding 2021 season. However, a little pep talk between games three and four is just what Panas needed.

“We all came into the huddle a little down on ourselves,” said senior and captain Tristan Demas. “However, we all took a collective deep breath and refocused ourselves. We knew what we had to do and that was play our brand of volleyball. We were hungry for that win and that set came down to who wanted it more, and it was us.”

Panas, now 19-1, is joined by Burnt Hills-Ballston Lake (Section 2), Niagara Wheatfield (Section 6) and Wantagh (Section 8). The teams will compete in pool play, beginning 8:30 a.m., Saturday. The teams will play six games apiece. The two teams with the best records will play for the Class A state title, noon, Sunday.

Panas only faced a 2-1 deficit once this season, to undefeated Class B champion HENDRICK HUDSON, and battled back to force a fifth game. Demas pointed out the team did recall that experience and how well it played, despite the final result.
And in the Section 1 Class A final, Panas was in the opposite position, leading Nyack, 2-1 after three games, before the

RedHawks stormed back to force a fifth game.

“The last two games were a ‘now or never’ kind of scenario,” Demas said. “We all knew this was the last game before states and we had to push through. We had made it this far and to lose right before our destination was not an option. I saw relentlessness and heart in every single one of my teammates like I’ve never seen before. It was a team win.”

Even after evening the score at 2-2, Cornwall got a fast start in game five and was in control, leading, 21-17, before Panas seized the momentum.

“We played like we had nothing to lose and stayed loose,” Demas said. “Before the fifth game started our mentality was just, ‘Win or lose, this is the last set. We want to leave everything on the court,’ and that’s exactly what we did.

“During the fifth game we were down by a good difference of points, but as a team, we were able to pick each other up and rose to the occasion.”

Mackenzie Calhoun was a sophomore on the HEN HUD team that won the Section 1 Class B title and would play in the state final four. However, it did not go the way Clahoun and her teammates would have liked.

“I remember it being bigger than life,” Calhoun recalled. “It was the biggest venue that my teammates and I ever played in. We didn’t play our game.”

Hen Hud lost in pool play, but it was an experience Calhoun won’t forget. Calhoun knows she and her teammates will not allow that to happen this year as the Sailors are returning to Glens Falls after sweeping Section 4 champion Owego in a regional semifinal, at Hen Hud, and eliminating Section 9 titleist New Paltz in three games in a regional final at Millbrook High School.

Undefeated Hen Hud, 25-0, will face Broadalbin-Perth (Section 4), Marcellus (Section 3) and John Glenn (Section 11) in Class B pool play, beginning 8:30 a.m Saturday at Glens Falls. The teams will play six games apiece and the two teams with the best records will play for the Class B state title, noon, Sunday.

“We had a little talk about it after the match,” Calhoun said.. “I wanted to let them know it’s really big and can be intimidating and we can’t let it get to us. I think that’s what happened to us in 2019. Basically, everyone is excited we’re all going now and we are preparing with the knowledge that we have to do our best when we go.”

Hen Hud had a long wait before taking the court against New Paltz at 4 p.m. The Class B regional final was the conclusion of the quadruple header at Millbrook. Calhoun said the team arrived three hours early, but put that time to good use.
“They gave us a classroom, so we talked about the game and went through our lineups,” Calhoun explained. “We played our fun games. We did a lot of running in the halls and little exercises to keep our blood flowing and pumping.”

Once Hen Hud began pre-match warmups, Calhoun sensed the team was on point.

“Everyone was locked in,” Calhoun said. “We knew this was it and we knew the importance of every game, now, and we went into the match with a different mindset than during the regular season.”

“We put some new people in the back row and they did a great job and I’m really proud of them,” Calhoun said. “We were able to finish what they started.”

Hen Hud received an added bonus in its first-round state regional against Vestal as the Sailors played one more match on their home court. As a result, Hen Hud fed off the energy from its enthusiastic, jam-packed crowd.

“That was amazing,” Calhoun said. “We were so lucky to have them. I don’t think we ever played for a crowd that big. Everyone was there and supporting us. They were a huge energy booster.” 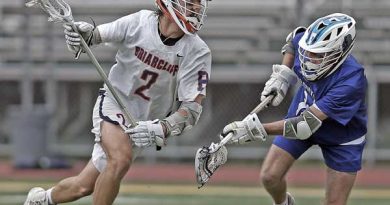 Briarcliff Crushes the Broncos in the Class D Sectional Final

Lichtenberger Pitches the Foxes to a Win Over Greeley