The bubble is now in the hands of Greenburgh voters.

At last Monday’s town board meeting, the Town of Greenburgh voted to approve a lease for Game On 365 to build the Westchester Fieldhouse on Dobbs Ferry Road- pending a referendum voted on in November.

This will give voters a chance to decide whether to approve the project, which has become a contentious issue in town, with a highly publicized campaign against the project.

“If people don’t like the lease, they can vote against it,” Supervisor Paul Feiner said.

Feiner believes that putting the project in the hands of the voters will help expedite the process for the project.

“Some people are doing everything possible to derail the project,” Feiner said. “You go before the planning board and have 30 people at a meeting, and the board will think that this is what people want. If you have 15,000 people voting for it, this will send a message that people want it. It will allow the planing board to feel better about the process.”

Town officials say that leasing to Game On 365, which would build a complex called the Westchester Fieldhouse, complete with a dome bubble, would create revenue, help lower taxes and allow for much needed field space, while opponents have questioned the speed in which the town is entering the deal and how much traffic would be created.

The town took over the Dobbs Ferry Road site after Frank’s Nursery was foreclosed.

At a July 19 meeting, Feiner told residents that state law prohibited the town from letting residents vote on the project. Feiner said that the town found out two weeks ago that its lease is subject to a permissive referendum.

“I have always been supportive of the idea of putting it up for a referendum,” Feiner said.

Last week Simon Cohen, who runs an organization opposing the project, sent out an e-mail claiming that the lease is illegal.

“Section 283.611 of the Westchester County Code (Purchase and Sale of Tax Lien Property) states that the Town Supervisor shall (meaning “must”) sell any property acquired by the town by reason of any tax lien.,” Cohen said. “As such, the land cannot be leased. This would be illegal.”

Feiner said that the town is “pretty confident” that state law, which permits the lease, supersedes the county law.

Despite the negative campaign against the lease, Feiner said he is hopeful that town residents will approve the lease and said that reaction from constituents has been positive.

“There is an awful lot of misinformation,” Feiner said. “This gives us a chance to explain it to the public. I don’t want people feel that government is ramming this through, I want them to feel like they are a part of the process. I think this will pass easily.”

Cohen said he is “99.9 percent” sure that the lease is illegal and that county law supersedes the state law.

“Any lawyer would tell you that,” Cohen said. “I don’t understand, what is it about this deal that makes them so adamant to push this through, regardless of any laws being broken?”

Cohen said he hopes that the lease is rejected before a vote can take place. Cohen also said that Game On 365 is not being required to put down a security deposit, which raises further red flags.

“If you are renting an apartment or buying a house, you always have to put down security,” Cohen said. “That’s huge.”

In the first year, Game On 365 is expected to pay $260,000 and in Year 15 will pay $335,000 in property taxes. The property taxes on the property are part of Game On’s lease. As the town continues to work on the lease, those terms could change.

Critics have charged that the rent is too low and there is no cap on what the town must spend on cleaning up the site, among other grievances. 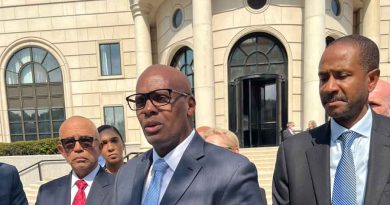