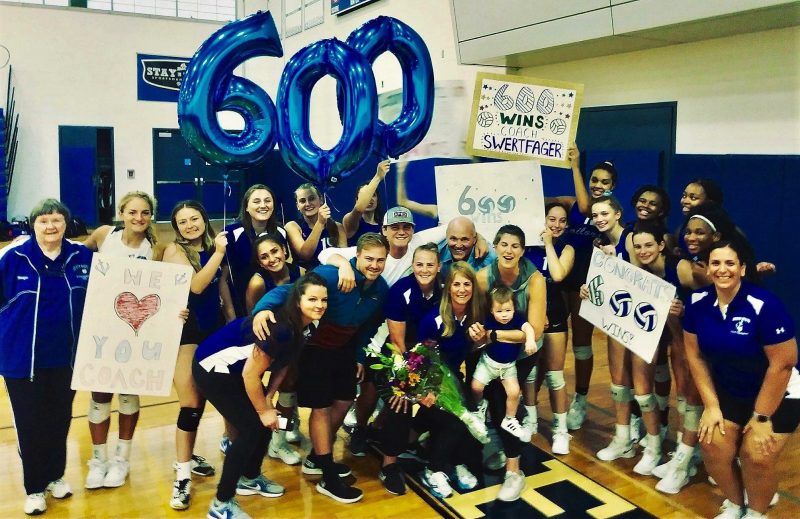 “I was only seven or eight when I first met coach,” said Pidoriano, a senior and captain. “Coach was, and still is, very good with kids, so I used to love going to the volleyball camps that she and her team held for the elementary school.”

Pidoriano and her current teammates, who began at these volleyball camps, would give Swertfager a milestone gift in their victory over Dobbs Ferry last week.

It was Swertfager’s 600th varsity win in her illustrious career. Swertfager joins Croton coach and good friend, Robin Cook, as the only Section 1 volleyball coaches with 600 career victories.

“We knew coach was approaching 600 wins this year, and I think we felt honored as a team to be able to share this win with her,” said Pidoriano, who also had Swertfager as her Phys Ed teacher at Blue Mountain Middle School. “Coach has put so much effort and care into creating a legacy at Hen Hud and it felt so good to be there to celebrate this success with her.”

The recent milestone is just one of many for Swertfager, who has also guided her team to 14 Section 1 championships, seven state finals’ and three state titles in her 32 years guiding Hen Hud. Swertfager has also witnessed many of her players continue playing in college and some return to their roots and coach in the program – current Junior Varsity coach Dina Bertoline, modified coach Alexis Augusta and varsity assistant Stephanie Gaminer. Swertfager is also joined by her daughter and 2019 University of Florida graduate, Theresa Swertfager, also a former John Jay-Cross River All-Section standout.

The always humble Swertfager enjoyed the victory, however, she was happier for her team.

“I was really excited for the girls,” said Swertfager, who had Hen Hud playing in the Hall of Fame Tournament, Columbus Day. “I remember at 400 and 500 how proud the kids were to be part of that. This is a special team to see them rejoice in their accomplishments, individually and collectively, and to thank them for their sacrifices.”

“I wanted to get decent uniforms,” said Swertfager, with a laugh. “We had ugly uniforms and awful, plastic, hard volleyballs that weren’t even good for phys ed classes. It was all about upgrading the equipment and earning the respect that volleyball existed as a sport and program and we wanted to get the girls to play better. And, immediately, the girls enjoyed the game and wanted to do well. We’ve always had supportive parents and the players understand the need to commit because we run a rigorous, fun program with high standards.”

Swertfager’s impact on the program was immediate as Hen Hud thrust itself among the Section 1 elite. The only problem was that Fox Lane and then-Coach Mike Galu were making sectional titles an annual happening. Hen Hud was on the short end of some of those titles, so Swertfager and her girls raised their collective commitment level.

“We were all willing to learn and improve,” said Swertfager, a setter at Springfield. “I started coaching at Pepsico Volleyball Club with Mike Galu and Patti Perone, two good mentors. When we finally beat Fox Lane and Mike was retiring, he smiled and said to me, ‘I leave this sport in good hands.’ ”

Once Pidoriano made her choice to play modified volleyball, she knew what the commitment level would be, especially when she got to varsity.

“On modified, I was so excited to go to the high school and play for Coach Swertfager and Coach Bertoline,” Pidoriano said. “I remember watching Coach Swertfager’s team and seeing how talented they all were, which is what sold me on volleyball and when I started to put all my time and effort into getting prepared for varsity.

“Coach is definitely tough; she knows how to push her players to get the most out of them,” she added. “At the same time though, she is loving, goofy, and supportive to her players. She makes it clear that the only reason she pushes her teams so hard is because she sees such potential in her players.”

Swertfager laughed when telling a story about a serious/comic situation in practice.

“The girls like it when I try to do the bad cop and then Theresa steps in to make fun of me,” Swertfager said. “The girls smile and try not to laugh, then they see Theresa laughing. It’s fun and brings some comic relief.”

Theresa joining the coaching staff is almost a rite of passage considering she spent many a day at practice with her mom.

“Growing up in the Hen Hud program was absolutely amazing,” Theresa said. “I would go to practice, watch the girls play and always admired how intense and driven they were to be better and for something that was so important to everyone, which was to win a state championship.

“Coaching with my mom has absolutely been one of the best experiences ever. I’m growing as a coach and learning new ideas and concepts that my mom is teaching. Combining our knowledge of the game has really helped the girls and their level of play.”

Hen Hud Athletic Director Tom Baker has had the pleasure of experiencing many Swertfager’s wins. Baker feels that Swertfager’s commitment to her team and program has made Section 1 raise it collective’s level of play.

“Coach Swertfager has a deep passion for the sport of volleyball,” Baker said. “I firmly believe that the level of play in the sport of volleyball has grown tremendously in our entire area, regardless of the school, due to Coach Swertfager’s success with Hendrick Hudson. We’ve sustained such greatness for so long, other schools had to raise their level of play. I’m always impressed how former players return, year in and year out, to visit. They consistently connect their personal success to their work on the volleyball court. It has been truly impressive to see Coach Swertfager sustain this greatness over such a long period of time.”

The sectional and state championships are rewarding, but Swertfager is more impressed with how her players mature into well-versed and well-rounded young women, first in high school, and beyond. While Swertfager gives the credit to her players, the players, and Theresa, know that it is all Swertfager. She is an excellent role model for her players and her students.

“Coach teaches her players the importance of being strong, confident and classy women in life,” Pidoriano said. “Being a female in a male-dominated field is not easy, and Coach Swertfager teaches us, by example that you can be successful, intimidating, and respected as a female coach. She also teaches us the importance of hard work, and how nothing comes easy. Coach really created more than just a team at Hen Hud, she’s created a family.”

Theresa agrees with Pidoriano and expanded.

“My mom is such a tremendous role model as a coach because she doesn’t just focus on volleyball,” Theresa said. “She shows the girls how to be better people off the court. As a role model it is important that you lead by example. My mom does a great job helping her players understand how to be the best they can be as an overall person and not just a player. A great coach doesn’t just focus on the players’ skills, they focus on the person and I believe my mom does a great job with that aspect.”

Oh, and a 15th Section 1 title sits merrily on the horizon.