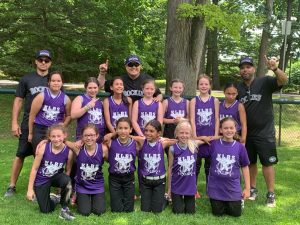 The playoff journey for the Rockies included a pair of exciting come from behind triumphs.

The KLBS Rockies capped of an undefeated regular season with a pair of post-season come from behind victories to secure the division championship.

In the semifinal playoff game the Rockies staged an incredible rally. Down a half dozen runs in the bottom of the final frame, the Rockies plated seven to win 11-10, besting the A’s. That win advanced the Rockies to Saturday’s championship game at Rasor Field in Katonah versus the Diamondbacks, where the 4th and fifth graders again trailed earlier in the matchup but marshaled another comeback, this time triumphing 8-6 to earn the top prize.

Carys Cooper led the Rockies on the mound and in the batter’s box in the decisive game. Her multi-hit performance at the plate featured three RBIs and she also pitched two innings, surrendering just one run. Cooper then handed the ball off to Evangeline Santos who shut the opposition down in relief.

Diamondbacks Coach John Foote, for his part, cited the fight his squad displayed all spring.

“Even thought the Diamondbacks came up short in the championship game, the team competed hard all season long,” Foote said. “The coaches are proud the team, and each girl contributed to a very successful season.”