By Martin Wilbur and Ariel Markowski 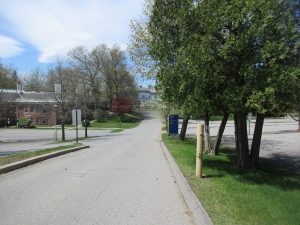 An empty Pace University campus earlier this spring. The possibility of remote courses continuing in the fall has complicated the search and decision-making process for college-bound students this year.

Isabella De Feo and her classmates have lost out on their senior prom, walking across the stage at graduation, proudly wearing the sweatshirt of the college they’ve selected and all the bittersweet goodbyes.

While the Somers High School senior and millions of others in the Class of 2020 have been robbed of those long-cherished experiences by the coronavirus pandemic, it’s their immediate future that has been thrown into the biggest flux.

Each year by May 1, nearly all students would know where they would be attending college in late summer, and admissions offices would have a clear idea of student enrollment.

But the process this spring has been scrambled with the possibility of online classes continuing in the fall, some students and parents having second thoughts about travelling too far from home and, in some cases, radically altered family finances.

“As much as (the coronavirus) has impacted our senior year, it has also impacted our college decisions,” said De Feo, who will be attending Quinnipiac next year. “Many people, including myself, have had to send in an appeal form for more money.”

That appeal turned out well for De Feo. She received the maximum scholarship, which allowed her to make her decision and commit to Quinnipiac.

But for others who don’t receive a significantly enhanced scholarship, or at least some assurance that they will have an on-campus experience in the fall that has long been a key drawing card for colleges, they and their families may not want to pay top-dollar to sit at home on a computer, according to several Westchester-based college counselors.

“That’s a very valid point and that’s a very big concern,” said Alan Sheptin, owner of Sheptin Tutoring Group in Chappaqua. “If I’m a parent and I’m sending my kid to a private college, just for starters $27,000 for five online classes, I could send my kid to Westchester Community College and do it for $5,000. The finances are a major issue in how the schools are going to respond.”

The possibility of distance learning remains real, particularly with schools in states that have had larger numbers of COVID-19 cases or have had hotspots. Last week, the California State University system, with about 500,000 students, announced its 23 campuses would remain closed and courses would continue online for the fall semester. Other public university systems and their private counterparts must also make a decision.

Ronald Feuchs, who owns and operates Stand Out for College, cited a survey reported on last month in Forbes and The New York Times revealing that 15 percent of college-bound high school seniors were considering a gap year.

Adrianna Tagayun has been one of the students mulling that option. Accepted to Worcester Polytech Institute, part of going to college is not just going to class, she said.

“I’ve been seriously considering taking a gap year because there is already so much student debt in the country and there is no point in paying thousands of dollars without experiencing college life,” said the Somers High School senior.

Uncertainty about enrollment levels is one reason why college wait lists have expanded this year, Sheptin said.

“Are students and their families going to be as open to being a plane ride away or on the other coast should another pandemic occur?” he said. “I’m hearing parents saying I don’t want my kid more than three hours away from home in case I have to get them in an emergency situation.”

But it may also be economic survival for some colleges. Feuchs said there will be far fewer foreign students in 2020-21, many of whom pay full tuition to go to college in the United States.

“If not enough students enroll and you don’t get enough tuition, that puts a tremendous financial strain on the university,” Feuchs said.

Many schools have held off on their deadline to commit until June 1, or in some cases as late as July 1, to allow students the maximum amount of time to decide.

Pace University, for example, moved its decision day to June 15, except for their performing arts students, who had to commit by the usual May 1 deadline, said Vice President of Enrollment Robina Schepp. Most universities extended the timeline, recognizing that students needed more time to make what for many is the biggest decision of their lives, Schepp said.

She said earlier this month that responses from students on committing had been slightly slower than normal but not significantly so. The university also accepted about 14 percent more students this year.

“The challenge is, for us, to really feel like we’re creating the same level of connection with students when we’re not seeing them face to face,” Schepp said.

One encouraging sign, Schepp noted, has been that the virtual visits this spring of would-be Pace students have been much more engaged than in previous years during on-site visits. Without able to see the school community in action for themselves, they are asking many more questions to get a better feel for their decisions.

The crisis hasn’t only impacted high school seniors, some of whom were making their critical decision without knowing what next school year holds. Neal Schwartz, owner and director of College Planning of Westchester in Armonk, said high school juniors are almost certainly to feel the impact on multiple levels.

The second half of a junior’s high school career has often been the most crucial time. But with cancellation of Regents, SAT and ACT exams and many schools opting for pass-fail grading, colleges are likely to view their performance with an asterisk, he said.

“For the high school juniors this was the year they were really supposed to shine,” Schwartz said. “(They are) taking a pass-fail course, they canceled Regents. How can I show my abilities?”

Feuchs said if more seniors take gap years for 2020-21, that will likely make the challenges for juniors more daunting. There will be fewer spots available for next year’s graduating class, particularly in public colleges and universities which offer comparatively greater value.

While SATs and ACTs have been rescheduled, there are factors that a student can control, Feuchs said. He advised this year’s juniors spend this summer working on their personal essay rather than wait to the fall when they will likely be juggling school work and the rescheduled SAT and ACT exams.

Despite difficulties that no previous graduating class has had to face, De Feo said she remains optimistic about her upcoming college experience.

“On behalf of the Class of 2020, I would like to say that although we are going through the toughest times of our lives right now that we are strong, we are fighters, we will get through this difficult time together, and good things will happen for us even though it may not seem like that is possible as we are going through unimaginable circumstances at this moment in time,” she said.