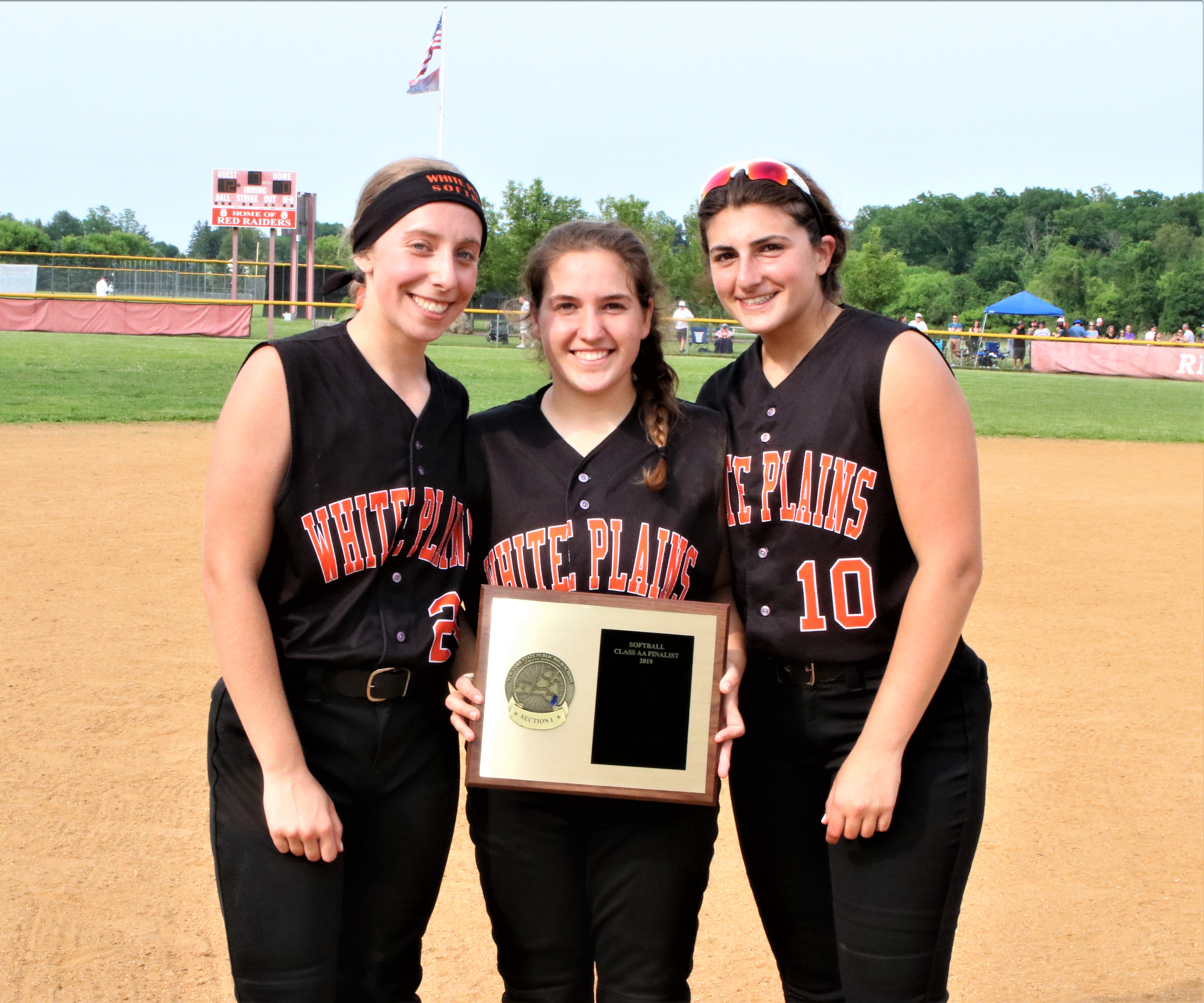 The White Plains High School Softball Team concluded a remarkable season with a record of 20-3, as the Runner-up in the Section 1 AA Finals. Nonetheless, with the entire team including (l-r) Captains Zoey Kovach, Sarah DiSanto and Ava Rainone returning next season, they will certainly be a force to be reckoned with in Section 1 Softball next year. Albert Coqueran Photo

The White Plains High School Softball Team and their fans were stunned by the 12-0 shutout loss to John Jay-East Fishkill High School, in the Section 1 AA Finals, at North Rockland High School, on Saturday.

A multitude of White Plains High School Softball fans, parents, softball alumni and administrators traveled to North Rockland to support the Lady Tigers in the Section 1 AA Finals. Nonetheless, they departed the 9 /11 Memorial Fields at North Rockland H.S. distressed regarding the outcome of the game, especially considering that the Tigers defeated the same Patriots team earlier in the season, 4-2.

It was truly an uncharacteristic performance by the White Plains High School Softball Team. The Lady Tigers had never allowed an opponent to score more than five runs against them all season, while recording eight shutouts this year. They also defeated opponents by a margin of 10 or more runs nine times this season, while scoring a total of 212 runs and averaging 9.2 runs per game in 23 games.

Granted Patriots senior pitcher Megan Schumacher pitched a remarkable game, while striking out 10 batters and holding the Tigers efficient hitting team to three hits for a complete game win. “I was throwing the pitches that were working for me and just doing the best that I could,” said Schumacher, the University of Missouri bound righty.

Nonetheless, a 12-0 shutout win for the Patriots was inconceivable against this young Tigers team who dominated most opponents this season. “No, I expected to beat them but not 12-0. No, no way,” replied Patriots Head Coach Mike Crocco, Jr. “I know how good our team is and I know how good they are too and we could not afford to take them lightly. They are a well-coached and talented team,” emphasized Crocco.

Talk about “uncharacteristic performances.” The Patriots batters slugged and slapped 18 hits off Tigers freshman pitcher Ella Utschig, who had been sensational throughout this season. And the Tigers bats went silent against Schumacher, managing only three singles in the game.

The Lady Tigers advanced to the Section 1 Finals by beating Arlington High School, 8-1 on Thursday, May 30.The Tigers won with situational hitting, a solo homerun by second baseman Alexa Galligani and three hits and two RBIs from shortstop Natasha Mendez.

The Tigers slammed nine hits off of Arlington’s freshman upstart pitcher Morgan Pepe, including a double by first baseman Ava Rainone, while Utschig held the Admirals at bay, relinquishing only three hits in the game.

This was the WPHS Softball Team’s first Section 1 Finals appearance since 2007, and the result against the Patriots was in complete contrast to the manner the young Lady Tigers played throughout the 2019 season.

“I think it was an incredible season. However, this is an unfortunate way to end it. But I think because of this experience in the Finals, we are going to be stronger, tougher and more experienced and we will be back next year,” stated Tigers Head Coach Ted O’Donnell.

The saving grace for the Lady Tigers is that they will have their entire team returning next season. Rainone and slugger third baseman Sarah DiSanto are the only juniors on the team. They are complemented by four sophomores including, catcher Zoey Kovach, centerfielder Amanda LeMark and outfielders Jillian Vignone and Evelyn Flores.

Galligani, who made a name for herself this season, is one of five starting freshman on the team with pitcher Utschig, shortstop Mendez, leftfielder Sasha Persaud and rightfielder Kiersten Hardy. “We played our hearts out every game (this season). This is just a tough loss that we had to take but we will be back next year,” said Team Captain DiSanto.