Skip to content
SPORTS The White Plains Examiner
January 4, 2017 Al Coqueran
We are part of The Trust Project

It has been a seesaw season for the White Plains High School Boys Varsity Basketball Team in 2016. With eight games played before the start of the New Year the Tigers record remains 4-4 on the season.

Nonetheless, the Tigers have made significant progress since their Home Opener loss to Yorktown H.S. in the Harry Jefferson Showcase. The Tigers had an impressive win over Arlington High School, 43-32, before losing in the Opening Round of the Harrison Tournament to their northern County rival Peekskill High School, 51-60.

The Tigers put together back-to-back wins for the first time this season by beating Harrison High School in the Consolation Game of the Harrison Tourney 49-39 and then holding off Horace Greely High School, 71-64, on Dec. 19, at Greely.

But the Tigers sustained an ugly defeat to Clarkstown North, 63-44, on December 21, which solidifies the characterization of a “see-saw” season. However, then came the 18th Annual Slam Dunk Tournament at the Westchester County Center from Dec. 27-29.

It was the Tigers performance in this year’s Slam Dunk Tournament that confirmed their distinction of, “making significant progress” thus far this basketball season.

Tigers freshman guard Eisaiah Murphy scored 10 points against the Central Valley Crusaders and forward Spencer Lodes dominated the defensive boards while snatching eight off the glass and finishing with a total of 10 rebounds.

White Plains advanced to the Slam Dunk Bracket One Championship Game in their home away from home, the County Center, but their next Slam Dunk challenge presented a monumental task.

On Tuesday, Dec. 27, the Tigers were matched-up against number two in New York State, Cardinal Hayes High School, who was undefeated at game time, at 9-0.

To most everyone’s surprise the Tigers came within one bad pass and one or two poor shot selections from handing the Cardinals their first loss of the season, even before Hillhouse High School ended Hayes’s winning streak at 10 games, on Friday, Dec. 30.

Murphy, the Tigers young freshman guard, topped his Opening Round performance against the Crusaders by scoring 17 points and hitting 4-of-8 from behind the arch against Hayes. Shuler complemented Murphy again by notching a double-double with 12 points and 11 rebounds. But Hayes outlasted the Tigers, 64-57, to take home the Slam Dunk Bracket One Championship Trophy.

“We played with some toughness, we just needed to take care of the basketball better in a couple of key spots and we would have been alright,” stated Tigers Head Coach Spencer Mayfield.

The Tigers showed resiliency by coming back from being 14 points down in the third quarter to getting within four points with 21.2 seconds left in the game. But it was just not enough to overcome Slam Dunk Championship Game MVP Joe Toussaint’s 17 points or Cardinals forward Terry Dawkins game-high 21 points. Toussaint converted 13 of his points from the foul line on 13-of-18 shooting and Dawkins hit 7-of-8 free throws.

The Tigers for the third game this season found themselves way on the short end of free throws in a game. The Cardinals shot 21-of-32 from the foul line while the Tigers received a mere nine opportunities from the charity strip while making eight of those shots. The Tigers 28 turnovers did not help them either.

Both Murphy and Shuler performed remarkably in the 18th Annual Slam Dunk Tournament. The Tigers young freshman combined for 27 points in two games in his first Slam Dunk Tournament with 17 of those points coming against the best of the CHSAA AA. “Eisaiah (Murphy) is a tough young player. He is coachable, he wants to get better and he is not afraid of the big moment,” acknowledged Mayfield.

Shuler displayed in the Slam Dunk that he is ready to lead the Tigers as the heart of the Section 1 AA schedule commences in the New Year. Besides his 12 points and 11 rebounds against Hayes, he also had seven assists with only three turnovers.

Shuler’s statistics in his two Slam Dunk games equaled 24 points, 19 rebounds, 11 assists with only six turnovers, while playing 32 minutes per game. “Michael Shuler has been stepping up for us all season. He plays both sides of the ball and he plays hard; some of these college coaches better wake up,” said Mayfield.

Murphy stated in the postgame interview after the Tigers loss to Hayes. “We made a lot of mistakes at the end of the game; we could have beaten them. If we can hang with them we can hang with any team in our league.” 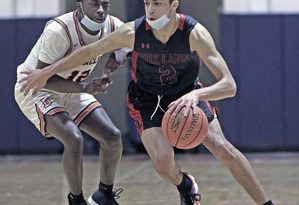 Fox Lane Cruises to a Lopsided Victory Over the Bears