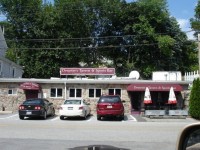 To help prepare and cook the traditional corned beef and cabbage, co-proprietors and brothers Stephen and Donald Demeter enlist the aid of their mom Connie every year. “The same passed-down family recipe is used every year,” Donald said.

Food service at Demeter’s will begin at 11 a.m. A limited menu will be available with additional dishes. Reservations will be accepted for parties of six or more but otherwise it is first come, first served.

The bar/eatery was opened in 1947 by Frank Demeter, Sr., and his wife Elizabeth, and for about 25 years its name was Glenville Tavern. Stephen and Donald became co-proprietors in 1990. A major renovation took place in 2006.

Street parking (there are no parking meters on the street) is plentiful along Old White Plains Road.