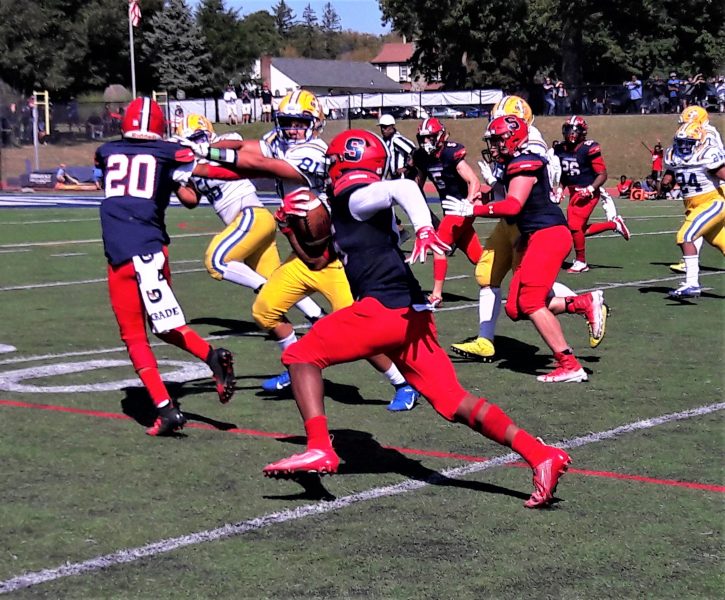 Stepinac senior middle linebacker Da’vaine Cushnie setup a touchdown in the second quarter by intercepting a pass in St. Peter’s territory and running the ball back to the Eagles one yard line. Albert Coqueran Photo

The Stepinac Football Home Opener mirrored the results of their two road wins to start the 2019 season. Stepinac overpowered St. Peter’s Boy’s High School, 48-14, on Saturday, at Stepinac High School. In the Crusaders initial three games this season; they have outscored opponents 124-35.

However, the difference in the Crusaders Home Opening win in relation to their first two wins this season, was that they not only conquered by air but by land as well.

Quarterback Joey Carino’s air attack in the first two games totaled 21-of-33 passes for 496 yards and eight touchdowns. Although, the Crusaders rushing game was responsible for only two touchdowns and 297 total yards.

“We just corrected the run game a little this week. Kevin McKenna, Mekhi (Green) and Kyle Benjamin they all got going,” acknowledged Carino, who contributed as well, while rushing for 32 yards and one touchdown.

Most of the damage on the ground against St. Peter’s was inflicted by senior running back Mekhi Green, who rushed for 71 yards and two touchdowns. “Obviously, the offensive line got better last week and that was the difference. The Coaches told us this week we wanted to establish our running game,” said Green.

Besides a 21-yard touchdown sprint by Michael Politi to start the second quarter, nothing was working for St. Peter’s. Furthermore, when they tried to get their team motivated it just backfired. Both of Green’s scores came as Stepinac capitalized on two failed onside-kick attempts by the Eagles.

Also, at 7:39 of the second quarter St. Peter’s Head Coach George Mahoney decided to take a gamble; the result was a Crusaders TD. The Eagles had fourth down on their own 29-yard line with less than one yard for a first down and went for it. The Crusaders defense, which has been stellar in all three games, held.

Thirty seconds later running back Kevin McKenna pounded his way through the Eagles defense for a 17-yard touchdown making the score 21-6.

Then all the momentum swung the Crusaders way when middle linebacker Da’vaine Cushnie intercepted a pass and ran to the one-yard line of the Eagles. Carino did the honors and snuck over for the TD.

At this point of the season, the Crusaders appear unbeatable. But do not tell that to Head Coach O’Donnell. “The season really starts right now. In our division with Iona, Cardinal Hayes, Christ the King, St. Anthony and Monsignor Farrell, you can lose every single week,” stressed O’Donnell. “Getting ready to play in November is what’s important. These first three games didn’t count as far as the rankings. Now it’s important to put yourself in the right spot for the home games in the playoffs,” emphasized the Crusaders Head Coach.

Iona Prep will be the first of the aforementioned challenges for the Crusaders. Who could forget the performance last season of Crusaders running back Malik Grant, the last time these two arch rivals met on the gridiron? Grant ran for 392 yards on 38 carries and scored three touchdowns, as Stepinac beat Iona 37-26, in the CHSFL AAA Semifinals.

Both teams come into the game unblemished at 3-0. It is a new season but the same intense rivalry. The Gaels visit Stepinac to play in the Joseph R. Riverso Memorial Game, on Saturday, Sept. 28, at 1:30 p.m. Better get there early; even the coin toss will be exciting!