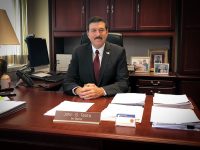 Westchester County Legislator John Testa, the board’s Republican minority leader, announced this morning he will not seek reelection in 2019.

Testa, who will be completing his fifth term as a Westchester legislator, served the last six years as minority leader for the county board. He has been an elected official for 22 years, starting with his 1997 election to the Peekskill City Council followed by three terms as mayor of Peekskill.

“I want to thank the communities I have represented for the continued support given to me over the years,” Testa stated in a press release, also noting he has never lost an election. “It has been an honor and a pleasure to serve and now it is time to pass the torch and step back from elected office.”

Testa was also a veteran educator, retiring from teaching in 2013, after 33 years at Peekskill High School, where he also graduated as a student.

Republicans control just four seats on the 17-seat county board, and Testa’s departure sets up a competitive race this fall.

“My record of fiscal responsibility is one I am very proud of,” said Testa, who represents Cortlandt, Peekskill and Yorktown in District 1 on the county board. “I wanted to also elevate the standing of Northern Westchester communities in county government and bring the appropriate resources and infrastructure improvements we deserve.”

Testa stressed he will remain active in local affairs even though he will be retiring from official public service.

“I will now have more time to dedicate to the Lincoln Depot Museum and emerging business responsibilities,” Testa said. “More opportunity to travel, read and learn is very attractive to me. Most importantly, I look forward to more time with my family and being a soon-to-be grandfather.”