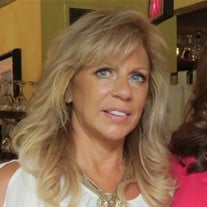 Susan G. Manzella, a resident of Cortlandt, died September 8. She was 68.

Susan spent 25 years working as a kindergarten aide in the Yorktown School District where she put her creative talents to use. She was an amazing hostess and loved entertaining at her home. Susan was truly the life of the party. She enjoyed cooking, decorating, and shopping. Out of all of her hobbies, spending time with her six grandchildren was her favorite thing to do. Susan, always thinking of others, put her family and friends first in all aspects of her life.