Skip to content
Generic SPORTS
December 24, 2018 Al Coqueran
We are part of The Trust Project

Stepinac Head Basketball Coach Pat Massaroni has too much class to single out a referee’s foul call late in the game as a reason for the Crusaders’ loss in the opening round of the 20th Anniversary Slam Dunk Tournament. However, that particular foul call changed the momentum and had a huge impact on the outcome of the game.

Crusaders Malcom Chimezie fouled out on a controversial offensive foul call with 1:49 remaining in regulation time, while the Crusaders were winning 58-56. Chimezie at the time had scored eight second-half points and was an aggressive presence under the basket.

“It was huge for him to foul out at that time when we had a chance to score two points and extend the lead; that was a big call which took away our chance to go to the foul line,” mentioned Massaroni. “But I think there was a lot more to our loss than just that call. We turned the ball over too much and did not get key stops down the stretch,” continued Massaroni.

And of course, Massaroni’s analogy is not merely tactfulness; it is valid. It was not just one foul call that made the difference in the Crusaders, 72-69 loss to St. Raymond in overtime in the Slam Dunk Tournament.

The Crusaders led by as much as eight points late in the third quarter and maintained the lead until 12.8 seconds left in regulation time. Crusaders RJ Davis made two free throws to put the Crusaders ahead 60-57 with 18 ticks left on the clock. But Ravens Malachi Smith was left open to counter with a three-point shot to tie the game.

Adrian Griffin, Jr. playing in his first game this season after missing five games with a fractured foot did all he could to win it for the Crusaders. However, his looping lay-up circled the rim and missed at the buzzer to yield overtime. “I could not believe it. Nonetheless, my body feels good and I am just glad to be back with my team,” commented Griffin.

Griffin was hardly at full strength but he took the team on his back in OT, while scoring a clutch three-pointer, up-and-under layup and snatched a crucial rebound with 28 seconds left in overtime.

However, Ravens Gray Grant and Jalen Reneau answered to neutralize every Crusaders game-winning threat. Even when Crusaders guard Eduard Minaya scored to bring the Crusaders within one point with 8.6 left in OT. Grant, the 6’6” junior, surfaced again under the basket for two-points to put the game away for the Ravens, 72-69.

Chimezie’s fifth foul was called in the heat of the game with him going to the hoop when he bumped a Ravens defender who was already falling backwards and moving his feet while attempting to regain his balance. Chimezie should have been shooting two free throws or a “no call” might have led to two points for the Crusader big man.

The play certainly did not lose the game for the Crusaders but it surely was a controversial call that had a major impact on the eventual outcome of regulation time. Another crucial aspect of the Crusaders loss to the Ravens was their insurmountable 25 turnovers in the game.

Davis scored 18 second-half points for a total of 24 points and shot 11-of-13 from the foul line in the game. Griffin ended the game with a double-double of 14 points and 14 rebounds.

It was a rough weekend for the Crusaders in the 20th Anniversary Slam Dunk Tournament. On Dec. 22, in the Third Place game, the Crusaders were edged by Curtis High School of the PSAL, when Warriors Adeleye Oyekanmi hit a 50-foot shot at the final buzzer to beat them, 72-69.

With the loss to Curtis, the Crusaders finished out of the running in this year’s Slam Dunk Tournament. They are presently 1-6, this season with a tough CHSAA AA schedule ahead of them. Long Island Lutheran won the Championship in Bracket II of the 20th Anniversary Slam Dunk Tournament by beating St. Raymond, 69-52. 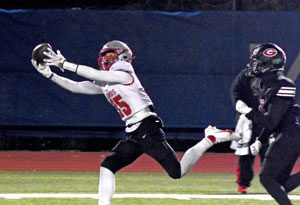 Lost and Found: Bull is Back 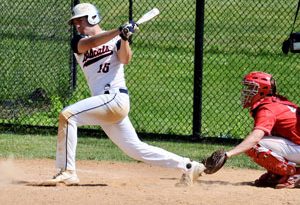