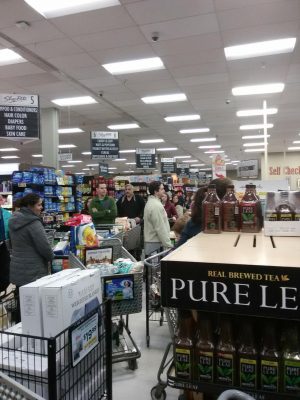 The growing health crisis caused by coronavirus produced long lines of shoppers at local supermarkets last weekend, including at the ShopRite Sunday morning in Thornwood.

Westchester County declared a state of emergency in the escalating battle against coronavirus Monday afternoon, a decision that will shutter schools and many businesses and keep thousands of workers home for the foreseeable future.

The decision, made by County Executive George Latimer over the weekend, was in concert with an increasing number of restrictions imposed through executive orders from Gov. Andrew Cuomo that closed down gyms, bars and restaurants statewide as of 8 p.m. Monday to limit public gatherings and hopefully halt the spread of the virus. Food establishments will be able to remain open only for takeout and delivery service.

Theaters are now closed and gatherings are limited to no more than 50 people.

While the private sector closures are currently voluntary, that could change.

“We strongly advise that only services and businesses that are essential stay open,” Cuomo said in his Monday morning briefing. “Grocery stores, gas stations, pharmacies; it’s not mandatory at this time. It may be in the future, but it is strongly advised at this time.”

While most public and private school officials made the decision to close on their own by the end of last weekend, Cuomo’s executive orders mandate closures starting Wednesday and stretching through Mar. 31, giving districts a chance to arrange for children who receive free and reduced lunch and for families that need to find daycare for younger students. It also allows schools to prepare to set up online learning.

Cuomo also asked that local governments reduce their workforce by at least 50 percent, keeping on only essential employees. Locally, all municipal offices will be closed to the public, with many government meetings conducted by Skype or other technology. Libraries have been closed as well.

“Work from home. I’m asking the same thing of private businesses,” Cuomo said. “If we can ask private business, the government leads by example. New York State will do this also.”

Latimer said when he decided on a county state of emergency it would have mirrored much of what the governor imposed. The governors of New Jersey and Connecticut have also forced similar restrictions in their states.

On Monday afternoon, county Health Commissioner Dr. Sherlita Amler said as COVID-19 spreads throughout the community, without a vaccine or a treatment the only way to contain the disease is to limit interaction.

“So that leaves us with one tool left in our chest and that is we can reduce exposure because without exposure there is no risk, without risk, there is no disease,” Amler said.

As of 11 a.m. on Monday, there were 950 cases of COVID-19 statewide, including 221 in Westchester. About 17 percent of the people who have tested positive needed hospitalization. There have been seven deaths caused by the disease statewide.

Cuomo said the need to limit public gatherings was to slow down the rate at which the virus is spreading. He said health experts have said those infected could be 40 to 80 percent of the population.

While an estimated 80 percent of those infected may have few or no symptoms, they can still spread the virus to the vulnerable population of seniors and those with underlying health issues and compromised immune systems, Cuomo said. If that happens, the healthcare system could buckle, he said.

Currently, there are about 53,000 hospital beds throughout the state, 3,000 of which are in intensive care units. Cuomo said he wrote an open letter to President Donald Trump asking that the Army Corps of Engineers be deployed to help retrofit empty facilities into hospitals.

Latimer said Westchester is among the counties looking to identify empty spaces that can be used.

“There’s no road map as to what we do next and how we move forward on this,” Latimer said.

For local officials, the challenges ranged from convincing their constituents to heed the warnings of the authorities or addressing irrational fears to making sure essential services are operating properly.

New Castle Deputy Supervisor Jeremy Saland said making sure that there are sufficient emergency responders on hand through mutual aid is one challenge.

“Every member of this community should recognize that our number one priority is their health and well-being – period,” Saland said.  “We will do whatever we need to do to assure that their safety is protected to the best of our ability.”

North Castle Supervisor Michael Schiliro said in addition to making sure all of the departments, including police and public works, have what they need, that the town leaders properly communicate what residents should be doing.

“I think you have a lot of people who are paying attention and complying, and then you have a fair amount who are not taking it as seriously as they should,” Schiliro said. “It’s not done to reprimand but done to reiterate and put in perspective how important this is, how important it is for letting people, who think they’re invincible, to at least think of people who aren’t invincible. You may survive it but you may pass it on to someone who can’t survive it.”