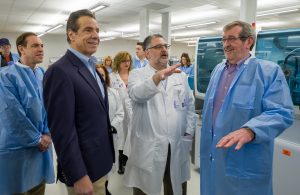 New York State reached 142 cases of coronavirus on Monday, with Westchester accounting for 98 of the positives, said Gov. Andrew Cuomo.

The number is the most of any state in the nation, one more than Washington state. However, New York has had no fatalities and so far only eight people have been hospitalized. The remainder of the individuals are or have been quarantined at home, Cuomo said.

Elsewhere in the state, as of Monday, there were 19 cases in New York City, 17 in Nassau County, four in Rockland, two in Saratoga County and one each in Ulster and Suffolk counties, he said.

Virtually all of the Westchester cases can be traced to the 50-year-old New Rochelle attorney who was the first positive case of the coronavirus, COVID-19, in New York State last Tuesday. There were a few large gatherings late last month at Temple Young Israel of New Rochelle, which has been linked to the spread.

Cuomo said as testing becomes more widespread, the number of cases is certain to rise.

“Westchester is our problem as you see from the numbers,” Cuomo said. “That is a relatively small community in New Rochelle; 98 cases (is) more than the City of New York and that makes the point about gatherings.”

Cuomo, who declared a state of emergency on Saturday, said that one of the challenges for officials to communicate is to avoid large-density gatherings, particularly in the areas where the virus has been prevalent and for vulnerable populations – the elderly or those with compromised immune systems or other underlying health issues.

State Health Commissioner Dr. Howard Zucker said on direction from the Centers for Disease Control (CDC), state officials will press the New Rochelle public school system to close. All of the private and religious schools in that community have been shuttered.

“You need to look at this as a community and there are other public schools in that community,” Zucker said. “We’ll be meeting with them to keep all the schools closed.”

Regarding the religious schools that have closed, Cuomo said “we could be talking about weeks” before they are reopened.

Late last week the Mount Vernon and Hastings school districts closed. The Somers School District announced over the weekend that it would be closed at least through Tuesday because of a positive in that community. On Sunday, Scarsdale school officials announced the district would be closed on Monday, then extended the closure for 10 days after a faculty member tested positive for COVID-19.

The county and municipal governments along with local organizations began canceling an assortment of upcoming to exercise maximum caution.

Despite the rising number of positive test results, Cuomo said that unless a resident is part of a vulnerable population, people should remain calm and remain at home if they don’t feel well.

“Most people (who) get the virus, get sick, you stay home,” he said. “Most people have mild symptoms. Most people don’t get hospitalized. The dangerous aspect, again, is people in that vulnerable population.”

Cuomo asked that employers, to whatever extent possible, allow people to take time off from work if they are not feeling well. The legislature plans to propose a paid sick leave bill to encourage people to work or stay at home.

Effective last April, most employees in Westchester County became entitled to earned sick leave, under a law passed by the Board of Legislators in October 2018.

Zucker said people who are prioritized for testing include those who have returned from countries of concern, anyone who has been close to someone who tested positive or anyone in the hospital where there is no other cause for why they may be experiencing symptoms.

Cuomo said Monday that he spoke with Vice President Mike Pence who is working with the state to allow for private laboratory testing. After a delay, the states received permission to have state laboratories do testing, but the demand is more than can be handled, he said.

Those that are not part of the vulnerable populations are unlikely to have serious issues even if they do get the virus, Cuomo said.

“There’s a level of fear here that is not connected to the facts,” he said. “There’s more fear, more anxiety than the facts would justify.”

For more information about COVID-19, including precautions, visit https://health.westchestergov.com/2019-novel-coronavirus or the state Department of Health at https://www.health.ny.gov/

People can also call the state Department of Health COVID-19 Hotline at 888-364-3065 or the Westchester County COVID-19 Information hotline 211.