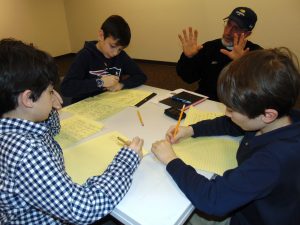 Sportswriter and publicist Richard Finn passes along his craft to three students at the Katonah Library’s Sportswriters Boot Camp last Monday. Pictured above, left to right, are Nico Vigil and Aaron Koenig, both fifth-graders at Katonah Elementary School, and Trevor Lombardo, a third-grader at Rippowam Cisqua School.

Will the next Red Smith or Mike Lupica trace his career back to a little class held weekly in the Katonah Library?

Thanks to veteran sportswriter and publicist Richard Finn, it might just happen.

Finn, a Goldens Bridge resident, has plenty of experience under his belt, having written myriad pieces for USA Today and other publications. He also directed public relations for the New York City Marathon, a position he held for 14 years, and the 1999 Women’s World Cup.

But it’s his background as a coach and trainer – he teaches tennis in Katonah and coaches junior-varsity tennis at John Jay Middle School – that has led Finn to pass along his passion to others. In Sportswriters Boot Camp, open to boys and girls nine to 14 years old, he guides the students through the mechanics of writing a sports article or column. Each week, they produce a finished piece.

“It’s been a lot of fun to see them take a story idea, a game that we’re going to do,” Finn explained. “They talk about it, take notes and then take the ideas and put them down on paper in a pretty articulate and cohesive way. We’ve taught them the who, what, when, where and how of a story. The piece is going to have a dateline, a byline, a lede (the introductory paragraph). They’re covering a different subject each class that I give them.”

In past sessions, the handful of students who attend each Monday from 4:30 to 5:30 p.m. have written about notable games from the previous weekend, along with producing opinion pieces such as whether Eli Manning belongs in the Pro Football Hall of Fame or who’s the better basketball player, Stephen Curry or LeBron James. Finn provides all the essential facts, catnip to these avid young fans, and he takes the part of the athlete in question to hone their interviewing skills.

“I’ve been fortunate to get two or three boys that have embraced it,” he said. “They’re sports junkies; they love talking sports with me.”

Last week, the subject they covered was star pitcher Gerrit Cole, whom the Yankees had signed to a nine-year, $324 million contract. Cole, 29, had boasted an MLB-leading 326 strikeouts for the Houston Astros last season, and he was making his debut as a Yankee at last Monday evening’s spring training game.

Finn is no stranger to the Katonah Library, where he can often be found in a quiet corner, reading, his first love before he discovered sports. Discussions with library staff about a writing program there followed his participation last year as a mentor to students in Katonah Elementary School’s biennial Do the WRITE Thing writers workshop for fourth- and fifth-graders.

It turned out the library had been pondering a similar program.

“We were trying to think of different things that might get kids going, particularly young men in the library because they’re very hard to draw in here,” said Katonah Library Director Mary Kane. “But then we got the idea to do this based on (Finn’s) profession, which seemed perfect.”

“In a lot of libraries, we start to lose kids as they age out of the children’s room and then no longer necessarily feel at home in the library,” said Michael Robin, the librarian in charge of engagement and special projects. “We’ve worked really hard to let them know there’s a natural progression from story times and all the staples of the children’s room that we do so well here, that there’s another tier, that they’re still welcome, that this is a place that both the parents and the tweens can feel excited about visiting.”

Robin said Finn’s weekly session is an example of how the community and the library have collaborated to present an engaging program for a sometimes hard-to-reach population.

“When Rich comes forward with his experience and his passion and his comfort level with working with kids this age, it’s really a no-brainer,” he said. “The feedback for Sportswriters Boot Camp has been unbelievable.”

Whatever the effect on Finn’s students at school – one parent calls her son’s growing interest in writing a “godsend” – what he would most like to leave them with could be lasting.

“When you see them sitting around the table, you can see them thinking,” Finn said. “With everything else that a computer can do, it can’t think for you. Being able to take your thoughts and put them down on a piece of paper, whether you’re in marketing or a teacher or a writer, whatever, you’re going to have to articulate your thoughts to somebody else.

“If you can open that door for kids, and support where they want to go, even in a little way, it may help these kids somewhere down the line.”