YORKTOWN did something to SOMERS in their game last Friday that not many teams can swag on this season. In what might be a Class B Final 4-type preview, the Cornhuskers held the high-powered Somers’ offense to its lowest output of the season in an 11-10 victory at Charlie Murphy Field. It was one of three victories during the week for the surging Cornhuskers.

“Our defense has been working especially hard in practice and I’m glad it is showing on the field,” said Yorktown senior and captain, Sophia Spallone. “Our defense was very efficient with communicating and our goalie, Sophia Altimaria, had another amazing game.”

Not only did the defense, led by Altimaria, shine, Yorktown was motivated from the opening draw.

“The hustle from each player was outstanding,” Spallone said. “The energy throughout the entire team was through the roof, on and off the field, and that kept us motivated until the final whistle.”

Yorktown Assistant Coach Bianca Raniolo was impressed with her team’s performance and resiliency this season.

“This was a huge win for us,” Raniolo said. “Our girls have worked so hard this whole season even though things haven’t always gone our way. I feel this was a turning point for us.”

“Our seniors and captains stepped up immensely and we had other players rise to the occasion in this high-pressure game. We are so proud of their hard work and hustle in today’s game, but we know that we need to get back to work to prepare for the final games ahead.”

Ella Kittredge and Lauren McMartin each had three goals for Somers and Noelle DeMarinis and Julie Sirchia added two apiece.

Yorktown followed up the win over Somers with a 12-9 victory over Mamaroneck behind Spallone’s four goals and three goals by Borges.

Yorktown opened its week with a 15-5 thumping of MAHOPAC, highlighted by five goals and five assists by Borges.

Mahopac was led by Gigi Genovese and Amanda Beberman, each with two goals, and Avery Przymylski had two assists.

“The ball just didn’t seem to bounce our way,” said Mahopac Coach Jim Lieto of the Yorktown game. “We hung within striking distance at 8-5 until about 10 minutes left in the game, but then it just unraveled with Yorktown controlling possession of the ball and out scoring us 7-0 the rest of the way.”

Yorktown dropped a 13-10 verdict to John Jay-Cross River, despite five goals by Paglino.

A pair of three-goal deficits did not deter Class C HEN HUD from rallying and beating John Jay-Cross River in overtime, 9-8, for one of the program’s biggest wins. The Sailors have now knocked off perennial Class B powers Yorktown and Jay this season and have set their sights on the Section 1 crown; what would be the Sailors’ first.

“Kira caused a turnover and then scored the game-winner,” Hen hud coach Rob Molfetta said. “The defense played great and we showed resilience by battling back twice from three-goal deficits.

“I was really proud of how relentless my team was and the resilience they displayed.”

McGovern had five goals in Hen Hud’s win over Lakeland/Panas (16-4). Varada added a hat trick and Popolizio and Montgomery had two goals apiece.

Hen Hud closed out its regular season with Somers, Tuesday.

In SOMERS’ 17-3 victory over Mahopac, senior and Columbia-bound Noelle DeMarinis scored four goals, including the 100th of her varsity career. Julia Sirchia had the assist.

“Scoring my 100th goal was a very surreal and humbling moment,” DeMarinis said. “At the beginning of the spring, I was unsure I would hit this milestone due to the Covid-related cancellations that would infringe on our season. I am beyond grateful that I was granted an opportunity to play a full season, and scoring my 100th goal during my senior year was the icing on the cake.”

The moment was special for DeMarinis because she hit the century mark on Somers’ turf.

“Scoring my 100th goal at home made this moment even more special,” DeMarinis said. “Having all of my family members, especially my grandparents, there with me to celebrate made it truly memorable.”

Kittredge and McMartin each had three goals and five draw controls. Gabby Parisi scored twice and Sirchia finished with a goal and two assists. Mia Parisi scored her first varsity goal. Goalie Nikki Casara made 10 saves, including her 100th of the season.

Somers enters the final week of the regular season with an 11-3 record.

Ava Jennings had a goal and two draw controls for Mahopac.

MAHOPAC closed out its regular season with a 14-11 victory over Scarsdale on a rainy, cold night, giving the Indians an 8-7 record.

Avery Przymylski went 15 for 22 on draw controls and she also scooped up seven ground balls.

“The girls really toughed one out in the pouring rain,” Lieto said. “We made key plays to stop Scarsdale every time they strung together some goals, and then got things going on our own runs. It is great to finish the regular season with a win and extend our winning season streak that dates back to 2010.”

It has been a steady, consistent progression during CARMEL’s 10 years as a varsity program.

The Rams are experiencing the finest year in program history after beating Arlington (16-3) and Croton (19-7, on Senior Night) to complete a 6-0 league season to win their first league title and improve to a program-best 11-4.

“We are very appreciative that we even got the chance to play, losing last season really hurt.” Carmel Coach Kerry Hackert said. “It’s been a crazy season, but we are working hard and still having fun! We are excited for playoffs and will find out who we play on June 3rd. The first round is 6/4.”

Ceisler amassed 10 goals and six assists against Edgemont. Among her 16 points was the100th of the season. She also had nine draw-controls.

“We knew Lilly was nearing 100 points on the season (with 84 prior to this game) and wanted to do something special for her if/when the time came,” Byram Hills’ Coach Jack Kensil said. “We didn’t think she would tally 16 points and reach it in this game. When Lilly was three points away from 100, I pulled her aside and said, ‘Lilly, I don’t have balloons or flowers, I don’t know if we have an announcer,’ to which she replied, ‘Oh. I don’t care about that stuff, Coach.’ in true captain and humble-leader fashion.

“I think we sometimes mistake the difference between being a leader, and being in a leadership position,” the coach added.

“Lilly doesn’t need the title of captain. She carries the equipment bags to and from practice more than anyone. You can find her driving the freshmen and sophomores to and from practice. And, recognition and accolades are nice, but Lilly prefers they go to her teammates.”

Byram Hills owns a program-best 10-game winning streak. The Bobcats are 12-3 and won the league title for the first time since 2017.

“We played really well and were able to play with some grit,” Westlake Coach Dan Smith said. “The Valhalla and Briarcliff games got close and we didn’t play tight or worried. Our attack is playing with patience and our defense is playing together. Our draw circle and midfield have been a huge strength all season. We are really proud of them given a crazy, compressed Covid-paused season.”

Gianna Eglauf finished with a game-high six goals against Ossining. Francesca DeMartino contributed five goals and she and Eglauf each had two assists, and Kyla Anderson had a hat trick.

The Bears (8-5 on the year) won their other game — 12-11 over Irvington — as Dylan Krsulich and Aframian had a hat trick and assist apiece. Cassie Lawler scored twice and Ava Swidler had eight draw controls.

PLEASANTVILLE began its week with a 13-7 loss to Class A Mamaroneck, but the Panthers rebounded to beat North Salem (10-8) and Horace Greeley (14-7).

In the win over Greeley, Reilly Byrne had four goals and four assists to surpass 100 varsity points.

“We trailed 10-1 at the half, against Mamaroneck, but then came back to make it 11-7,” Pleasantville coach Jaimie Williams said. “We started to win the draw in the second half and our offense started to click. Unfortunately, we missed many shots at the end that could have closed the gap more.”

Pleasantville, now 8-4 this season, held a commanding 12-2 lead at halftime before Greeley closed to within 13-7.
“Greeley came out strong in the second half and went on a run, but Claire and our defense came up big for us at the end to hold them off,” Williams said.

The 17 Brewster goals against Putnam Valley were a season-high as Nicoletta Goldberg led the Bears with four goals. Sasha Kulo and Margo Cunningham each had three goals and Juliet Arroyo and Alescia Nitti scored twice apiece.

“I’m proud of the girls on their team wins this week,” Brewster Coach Sara Didio said. “We have really seen progress since the beginning of the season. We finished our game on Monday against Pawling that was suspended from a weather delay the week before. We were able to keep the lead and continue to find the back of the net against Pawling. Against Putnam Valley, we had multiple girls score and contribute to the win. Our defense has really been playing team defense.”

Moe Poly and Cunningham each had a goal and an assist against Lakeland/Panas.

Kierra Ettere had four goals for LAKELAND/PANAS in its victory over Brewster. Emily Ahlstedt contributed two goals and Meagan Casey had one goal and three assists.

In PUTNAM VALLEY’S loss to Brewster, Eva Dechent scored two goals and Jessica Walsh added one goal and one assist.

HORACE GREELEY is now 6-7 on the season after a 17-6 win over Kennedy Catholic and a 14-7 loss to Pleasantville.

Grace Arrese, Molly Byrne, Finley Pollard and Bae Bounds had a hat trick apiece for the Quakers against Kennedy. 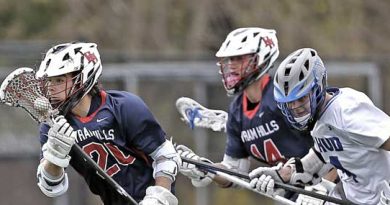 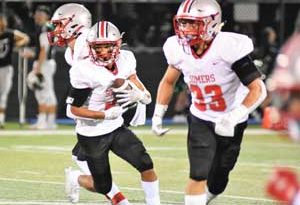