Skip to content
The Northern Westchester Examiner
February 15, 2019 Neal Rentz 280 Views 1 min read
We are part of The Trust Project

In response to the push by Governor Andrew Cuomo to legalize the recreational use of marijuana, the Somers Town Board is seeking to ban the sale of the drug.

The Town Board voted unanimously on February 7 to set a public hearing for March 7 at 7 p.m. on legislation that will be drafted by Town Attorney Roland Baroni.

At last week’s meeting, Supervisor Rick Morrissey said he was seeking a way to ban the selling of marijuana in response to Cuomo’s proposal.

“In my mind, marijuana is a gateway drug,” Morrissey said.

Morrissey said town Police Chief Michael Driscoll and the Partners in Prevention have expressed their opposition to the legalization of recreational use of marijuana.

While there were some comments from Town Board members that acknowledged there are differences of opinion throughout the country regarding the legalization of marijuana, Morrissey’s colleagues joined the supervisor in seeking to ban the sale of marijuana.

Councilman Anthony Cirieco said the state has estimated that legalization would bring in $300 million annually in new tax revenue. Councilman Richard Clinchy said the prospect of additional tax revenue should not be a motivation for the state to legalize recreational marijuana use.

Cirieco said Cuomo is proposing to allow large cities and counties to opt out of the marijuana legalization should it be passed by the state Legislature, but would not provide that option to towns and villages.

Clinchy said he was particularly concerned that if marijuana was legal more youths would use the drug.

Somers Board Takes No Action on Sanctuary City Designation Request 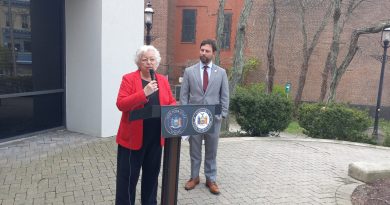