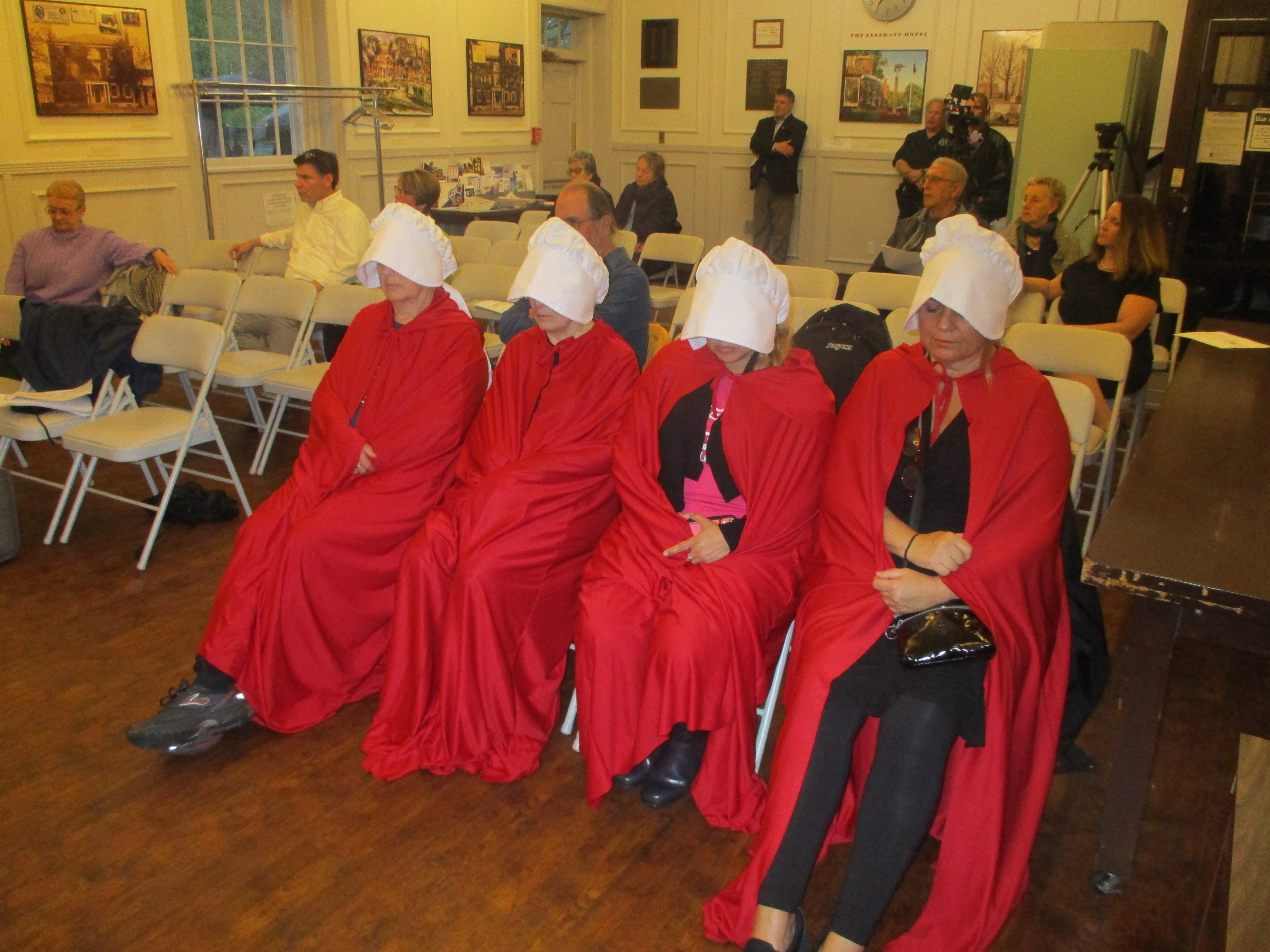 A group of abortion rights supporters dressed in costume related to “The Handmaid’s Tale” attended the May 2 Somers Town Board meeting to express their support for abortion rights.

The Somers Town Board declined to vote last week on a resolution that called for the overturning of abortion rights legislation approved earlier this year by the state Legislature.

A group of Mahopac and Somers residents recently asked the Somers Town Board to follow in the footsteps of the Carmel Town Board and Putnam County Legislature in passing a resolution calling for the repeal of the Reproductive Health Act.

The RHA states an abortion is legal within the first 24 weeks of the start of a pregnancy or any time after that if a woman’s life or health is at risk or if the fetus isn’t viable. Abortions could also now be done by other healthcare professionals, not just physicians.

The state Legislature, voting along party lines, approved the RHA this January and Governor Andrew Cuomo signed it into law shortly thereafter, leading to outrage among many conservatives across the state and country.

The Putnam County resolution called on the state to “protect the unborn” and criticized the RHA for expanding abortion rights past 24 weeks of a pregnancy that could lead to the “pain and suffering” of the baby in the womb. It criticized the RHA for allowing non-physicians to perform abortions, which the resolution stated could lead to “abuse” and also argued a late term abortion could be performed to protect the health of the mother, but the patient’s “health” is vague and undefined in the law.

All of the residents who spoke during the public comment period of a recent Somers Town Board meeting expressed opposition to the RHA. Somers resident Jerry Borreggine strongly opposed the law. “The law added a ‘health’ exception to New York law so that abortions are now legal in the final three months of pregnancy to protect a patient’s ‘life or health,” he said. “Health can include factors such as physical, emotional, psychological, familial and a woman’s age – relevant to the well-being of the patient.”

“A woman and her abortionist now have the right to choose … death,” Borreggine said.

At last week’s Town Board meeting, several abortion rights supporters, both from the town and elsewhere, came to call on the board to reject the legislation. Some of the opponents of the resolution included a group of women dressed in costume related to “The Handmaids Tale,” a novel, film and television series about New England in a totalitarian state in the near future.

Brooklyn resident Garin Marshall said in an interview that he supported the RHA. Under the old state law his family was forced to travel to Colorado in 2016 because his wife chose to have an abortion because her fetus was not viable, he said. She could not legally do so in New York State three years ago because the procedure was done after 24 weeks of pregnancy, which at the time was illegal.

Heritage Hills resident Flo Brodley thanked the Town Board for not voting to approve the resolution and said she supported the RHA, adding many of her friends shared her opinion. She thanked the state Legislature for approving the legislation “that safeguards women’s health” and “thank this Town Board” for not supporting the anti-RHA legislation.

Supervisor Rick Morrissey explained that the Town Board would not get involved in state matters and that his statement was announced at a subsequent meeting and was publicized in the print, on the Internet and on social media. “I also want to thank everyone who came out tonight to express (their opinions),” Morrissey said. “This is a very emotional topic. We understand there’s two sides to it. We do not feel this is the venue to have this debate.”

Councilman Richard Clinchy said he agreed with Morrissey that there should be no vote on the resolution. Not voting on the resolution should not be interpreted as the Town Board supporting or opposing RHA, he said. “The Town (Board) is here to deal with town issues,” he said, maintaining voting on state issues could be “misusing our positions.”

“People have not elected us to sit up here and to use it to espouse our personal moral position unless it has something to do with the town,” Clinchy said.