SOMERS served notice this year that it will be a prominent sectional contender for many years.

The Tuskers went 15-1 during the regular season, earned the second seed in the Section 1 Class A Girls’ Soccer Championship, won twice and was a win away from the title game.

However, Clarkstown North converted a penalty kick and that was the difference in a 1-0 semi-final loss.

Somers concluded with a 17-2 record, one of the finest seasons in program history.

“Overall, it was an amazing season, finishing 17-2 and going further than we went last year,” Somers’ coach Kelci Hegg said. “We have an extremely young team and are looking forward to building on our success this year. We will only get better and stronger next year. We will take the experiences both good and bad from this year and use it as our foundation for next year.”

Somers had beaten Clarkstown North, 2-1, during the regular season. The Tuskers scored twice in the second half of that game, after trailing 1-0 at halftime.

Clarkstown North made an adjustment for the semifinal that threw off Somers.

“It was a tremendously physical game and much different from the time we played them in the regular season,” Hegg said. “They pushed the pace and crowded the midfield in the first half making it difficult for us to get going.

“We unfortunately gave up a PK and that ended up costing us the game. We had some great chances in the second half, but were just not able to convert. Sophomore keeper Julia Schmidberger was stellar between the pipes coming up with several crucial saves in the homestretch to keep it a one-goal game.”

Somers opened sectionals with a 4-1 victory over Eastchester as Julia Arbelaez scored twice. Hegg cited the play of Anne Maguire for controlling the tempo of play and pushing into the attack.

Somers defeated Mahopac, 2-0, in a quarterfinal. Hegg said one of the keys to this win was the play of senior and captain Tori Olsen. She was assigned to neutralize Mahopac’s top player – Piper Klammer.

“Tori’s performance in that game was one of the best I’ve seen in her three years,” Hegg said.

HEN HUD introduced itself as a rising program after the Sailors had their best season 2014.

Coach Bill Pagel’s team finished with a 12-5-2 record, including a pair of Section 1 Class A victories – 7-0 over Hen Hud and 2-1, in overtime, over Yorktown. The No. 9 seed lost in a quarterfinal to top-seeded Albertus Magnus, 4-0.

“Overall, this was a historically great year for the Sailors,” Pagel said. “The 12-5-2 record was the fourth best winning percentage in school history. Lena Johnsen broke the single-season scoring-record with 49 points, 31 goals and 18 assists, and she also set the career-scoring record with an incredible 89 points, 58 goals and 31 assists, in her three-year varsity career. And, Liv Johnsen had the second best scoring season in school history racking up 45 points, 24 goals and 21 assists.

“The team also had one of its best defensive years, recording 10 shutouts and allowing only 17 goals in 19 games, plus opponents averaged only four shots on goal per game.”

The Johnsen sisters combined for six goals and five assists against Nyack. Liv Johnsen had both Hen Hud goals against Yorktown.

While the Johnsen sisters had a major impact on Hen Hud’s season, Pagel credited his senior class for its influence.

“One of the strengths of this year’s team was the excellent leadership and talent the seniors brought to the table, with most of them playing in their third varsity season this year,” Pagel said. “Although the senior captains, Katherine Couch, Kayla Cohen, Morgan Parks, Fiona Doyle and Lena Johnsen formally led the way, it was the remaining seniors that helped put us over the top with their key contributions throughout the season. Lexi Schaffer, Maddie McKinley, Sophia Jackon, Rebekah Anderson and Karli Martin all played vital roles at numerous points throughout the season. The strength of this senior group really helped set the tone and the mind set for this season. They had a big influence on how the underclassmen approached practice and the games. With this year’s performance they have clearly left their mark on the program and they have set a standard for future Hen Hud teams to chase.”

Next year’s team will certainly miss this group’s presence, but with a strong group of underclassmen returning we are optimistic about our future.

MAHOPAC went 10-6 during the regular season, earning the No. 7 seed in the Section 1 Class A Championship.

After the Indians opened with a 1-0 win over No. 10 Horace Greely, Mahopac dropped to a 2-0 verdict to No. 2 Somers in a quarterfinal game.

Freshman Cam Wilson had the goal, assisted by Juliana Mangione, against Greeley. Jess Sterbens was outstanding in goal, making 18 saves.

“That was a hard-fought win for us,” Mahopac coach Casey Carroll said. “I’m proud of the effort the girls put in to come out on top with a ‘W.’ I think Juliana played really well in the center of the field and Cam Wilson came up big, once again. The biggest shout-out goes to Jess Sterbens, who played a stellar game in net for us.”

Carroll was impressed with her team despite the final result to Somers.

“We were not only competitive throughout the entire game, but generated a lot of offensive opportunities that we, unfortunately, didn’t capitalize on,” Carroll said. “But, the potential to have the outcome of this game possibly go in the other direction with the the dangerous opportunities we were creating drove my girls to keep fighting until the very end.

“My defensive line played a great game keeping a high-scoring Somers’ team to a minimum and gave us a fighting chance.”

The Quakers, seeded 10th, won their out-bracket game over No. 23 Peekskill, but ran into a tough seventh-seeded Mahopac team. The result was a 2-0 loss as the Quakers finished with a 13-5 record, overall.

“The Greeley girls soccer team had a great season, going undefeated in our league (league champions this year),” Greeley coach Angela Russo said. “We had an excellent team of talented, hard-working players with a strong connection that was such a pleasure to watch. I am so proud of the way they played all season, and especially in the sectional playoff, where they never gave up, pushing forward and taking shots until the last second.”

Despite the 1-0 loss, in which Mahopac goalie Jess Sterbens made 22 saves, Russo was quite pleased with her team’s performance.

“Our defense was superb, keeping Mahopac bottled up much of the game,” Russo said. “Erica Rosendorf had the high-priority assignment of staying on the foot of Mahopac’s top-notch striker and she accomplished her mission with distinction. Additionally, Lauren Singer made several clutch stops in goal throughout the game. Were it not for outstanding Mahopac goalkeeping, victory would have been our’s. Despite the loss, it was a highly-competitive and entertaining game.”

The Panthers finished the season at 12-5-1 after losing to Irvington 2-0 in the semifinals last Wednesday. Coach Chris Oosterhoudt stressed how “the girls played hard and fought to the very end.”

“I was happy with our season and the progress we made throughout the year,” he said. “We were playing very good soccer late in the season when it counts the most.”

FOX LANE ended its 2022 campaign with a disappointing final record of 4-9-2. The team remained competitive in most of the first half of games, the coach noted. But due to injuries, and as a result a thin bench, the Foxes were often mismatched in the second half of play.

“We had a tough season filled with injuries to players in key positions which made it very difficult for an already young squad to overcome,” Coach Fabian Videla said. “The girls worked extremely hard all season long and improved over the season.”

BYRAM HILLS ended the fall season with an overall record of 11-7-2, securing a spot in the semifinals. Coach Julianne Marinaro explained how over the past two years, the team graduated its core, “so this year was really a rebuilding year.”

“However, the team did a lot better than expected,” she also remarked. “Our starting 11 consisted of only one senior, so we are looking forward to the next few seasons.”

LAKELAND went 9-7 during the regular season and was a first-time league champion in over 20 years.

The Hornets were seeded 15th in the Section 1 Class A Championship, but lost to No. 18 Eastchester, 2-0, in an out-bracket game.

“The team had one of its best seasons in recent memory,” Lakeland coach Shawn Sullivan said. “The team showed constant improvement throughout the season and gained the respect of all the teams in Section One.

“The team was led by senior captains, Deanna Lage and Laura MacDonald. Fellow seniors Madga Argiros, Riley McConnell & Ellen Ndreka provided the Hornets with a formidable offensive attack. Defensive players Samantha Moscati and goalkeeper Lily Merriam made it very difficult for opposing teams to score this year. Sofia Muccitelli was unable to play this year due to an injury, but did a great job serving as team manager.

“The underclassmen also provided the varsity with outstanding play on both sides of the ball.”

PANAS took another step in its evolution for coach Matt Schiff as the Panthers drew the 20th seed in the Section 1 Class A Championship.

Harrison, seeded 13th, defeated the Panthers, 5-2 in an out-bracket game. As a result, Panas finished with an 8-9 record.

Molly Muller and Cassidy Pisani had the Panas goals, both assisted by Giuliana Rodriguez.

“Our defense played incredibly well down the stretch led by seniors Sarah Chiulli, Jaelyn Helfrich, and Sabbia Gale-Donnelly. We would like to give a huge shoutout to Kelly McAleese who volunteered to play goalkeeper this season and made over 100 saves!”

WHITE PLAINS and coach Ali Rainone surprised themselves, after graduating 12 seniors from the 2021 team.

The Tigers were 8-7-1 for the regular season, earning the 11th seed in the Section 1 Class AA Championship. Unfortunately, No. 6 R.C. Ketcham eliminated the Tigers with a 2-0 victory.

“After graduating 12 seniors last year, we didn’t know what to expect this season,” Rainone said. “Thanks to a group of unbelievably talented freshmen added to the roster of already solid returning players, and an eighth-grader! We were able to keep up with high-quality teams that had starting lineups of all upperclassmen. I am so proud of this young team and beyond excited to see what the next few years bring together.”

The VALHALLA girls soccer program did not respond by press time to request for comment and clarification on the season. 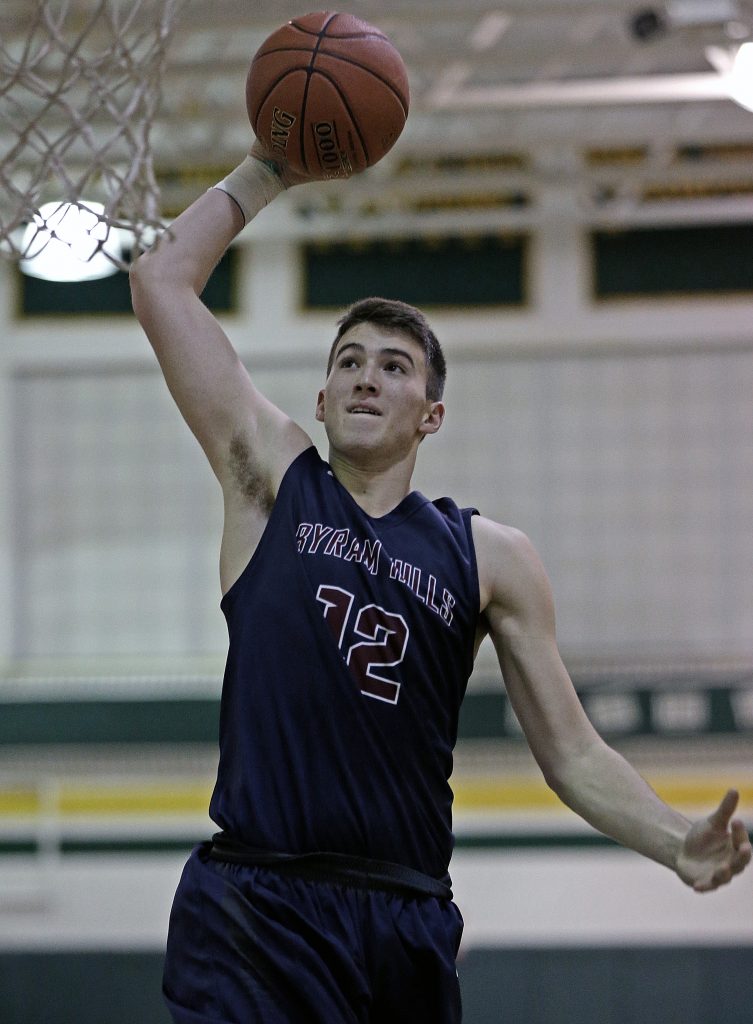