Skip to content
SPORTS
November 8, 2021November 9, 2021 Examiner Media volleyball
We are part of The Trust Project

Looking back at the pandemic-altered 2020 season, HEN HUD was quite happy to turn the page and look forward to 2021. Even with the 2020 varsity volleyball season pushed back to spring 2021, Hen Hud was shut down, because of Covid. As a result, Hen Hud did not have a chance to play in the season-ending county tournament.

“The girls were so psyched for this season because of the abrupt ending we had last year,” said senior and captain Mackenzie Calhoun. “We never got the chance to compete for another section title.”

Section 1 titles and trips to the New York State Volleyball Championships Final Four are synonymous with Hen Hud and legendary Coach Diane Swertfager, the best of the best.

Hen Hud had a Section 1-best 15 sectional titles heading into the Class B tournament. At the conclusion of its title-match against Briarcliff, the top-seeded Sailors added No.16 with a sweep, 25-12, 25-15, 25-8, over third-seeded Briarcliff.

“This means so much to us all, but especially Franny (Tissoni) and I,” Calhoun said. “Because we got shut down last year, we never got the opportunity to win a section title and now, our senior year is our last chance, and we are so lucky to have succeeded this year.”

Calhoun noted that Hen Hud had a good feeling about the 2021 season based on all but one graduated senior returning to the team.

“We definitely sensed that this was a special year,” said Calhoun, a four-year varsity starter and the recent Con Ed scholar-athlete award recipient. “We only lost one senior so this team is mostly the same girls, and we couldn’t wait for the chance to play together again. Our last regular season we went to states and we would love that opportunity again.”

After a dominant regular season, Hen Hud swept its way through sectionals. The Sailors are playing excellent volleyball, but Calhoun and her teammates believe they can still play at a higher level.

“I don’t think we have reached our peak yet,” Calhoun said. “After the regular season ended, I could feel us improving and I think even after sectionals we have yet to reach our peak.

“During sectionals the team was really pleased with our energy and hustle. We have never felt so hyped, especially with our awesome fan section and cheers we make up for each other. We would never let a ball hit the floor and the hustle was insane. Everyone would get so excited for each other that it made playing fun.”

The fun will continue for seniors Tissoni, Calhoun and their teammates as the Section 4 champions come to Hen Hud with a berth in a regional final on the line.

“We’re beyond excited to be hosting regionals, Wednesday,” Calhoun said. “It pumps us up that we will be home, not only because of the familiarity, but also the opportunity to have our big fan base and defend our house!”
Top-seeded WALTER PANAS was rolling in the Section 1 Class A Volleyball Championships title match, taking the first two games from second-seeded Nyack. The Panthers appeared to be on the verge of a sweep before Nyack came roaring back to even the match at two games apiece, forcing a decisive fifth game. The pressure was mounting, but Tristan Demas and her teammates knew what needed to be done before game five began.

“The only big adjustment we made was our mindsets,” Demas said. “Volleyball is a huge mental game and in sets three and four we felt we didn’t really play as a team. However, in the fifth set, we turned that around and moved as a unit to pull through and win the title.”

The Panthers will play the Section 4 champion in a subregional, Thursday, 11/11, 12:30 p.m. at Arlington. The winner advances to the regional final, noon, Saturday, 11/13, where it will meet the Section 9 champion at Millbrook H.S.

Along with regrouping and working as a team, senior Alanna Mansell pointed out a couple of other key adjustments.

“Going into the fifth set our blocking strategy and defense changed and one of our seniors, Siena Beiber, stepped up and gave us clutch serves during critical moments,” Mansell said.

Panas regained its championship status after two years in which the Panthers did not make the sectional finals.

This was after then-three-time reigning champ Panas went to three consecutive state tournaments.

“The past couple of seasons have been tough for us trying to follow up such a successful team,” Mansell said. “It’s not that we were not successful, we had finished in the sectional semifinals, but we are all hard on ourselves and strive to be the best of the best.”

Demas and Mansell pointed out that Panas defeated Nyack, in four games, at a regular-season tournament. Once Nyack evened the match, the pressure of a winner-take-all-game faced both teams so poise and composure would play a key role. As would focusing on each point.

“The key for us was to just relax and have some fun,” Demas said. “We know that we have the talent and confidence amongst all of our teammates and we just had to focus in on one point at a time.

“Yes, every point in the fifth set matters. We hustled for every ball and were relentless throughout the entire set.”
Now that Panas returns to state play, where it was a three-year regular from 2016-18, the Panthers are hoping to make it an extended stay.

“I started off my Panas volleyball career off with a state title and it would be really awesome to end it that same way,” Mansell said. “I am extremely proud of everyone for sticking together and winning this section championship, but we are moving forward with hunger. We will play another section champion on Thursday and, hopefully another one after that, too.”

WHITE PLAINS burst upon the scene in Class AA this season, registering an undefeated regular season and the No. 1 seed in the Section 1 Class AA Volleyball Championships.

The Tigers won their first two sectional matches before No. 4 North Rockland upset White Plains in four.
Despite the final result, White Plains’ Coach Caitlin MacDonald is proud of her girls and excited about the future.

“This season meant a lot to me as it was our first undefeated season in my 10 years coaching White Plains,” MacDonald said. “Our girls worked very hard through every practice and every game and were extremely proud of their well-earned undefeated record. Our players need to learn from this experience. They need to be mad that we lost, and take time to be upset and challenge themselves. They need to work harder during the next season, then we did in this previous one. If we are able to do that, and really, truly work harder every year than we did the last, this will be an amazing program for a long time.”

BRIARCLIFF had an outstanding season, winning two sectional matches among its 17 victories. The only drawback for the Bears and Coach Matthew Cochenour is that the Bears were in the Section 1 Class B Volleyball Championships, where perennial power 15-time Section 1 champion Hen Hud was seeded first. Briarcliff was seeded third and reached the title match where Hen Hud was waiting and the Sailors swept the Bears.

“I was very proud of how the girls came together and worked hard to continue developing their skills and our successes this year reflected that,” Cochenour said. 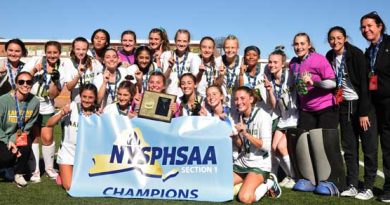 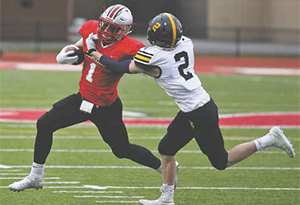