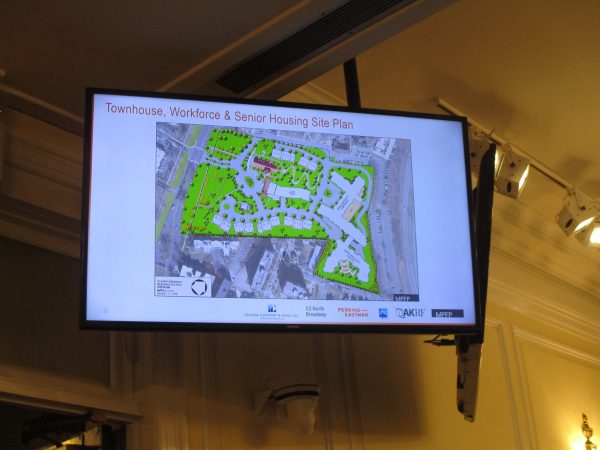 Representatives of the 52 N. Broadway project presented a scaled down proposal to the White Plains Common Council during a work session on Jan. 27.

The revised plan is “trying to address multiple concerns” raised at previous meetings about the site, Null said.

The alternative plan calls for 232 senior-restricted independent living units with enhanced services and on-site staff, a 103-unit assisted living facility, 28 two-story townhouses and 48 workforce apartments in one three-story building with most being studios or one bedrooms, and reducing the projected number of residents on the site from 1,085 to 610, a 44 percent decrease. Null said the plan is to have as much underground parking as possible. The assisted living and independent living would be in two connected buildings with a single operator for both. A clubhouse for residents would be constructed behind the existing convent formerly owned by the Sisters of the Divine Compassion (RDC).

The alternative plan reduces the number of proposed parking spaces to 450 from 655. According to the developer, with fewer people being proposed to live on the property there would be fewer vehicle trips on and off the property than originally proposed.

The new plan is proposing to reduce building heights to a maximum height of six stories or 85 feet. The original plan was for a maximum of 10 stories, 140 feet. According to the property owner, the first 700 feet of the site will have building heights at 45 feet or less.

The revised plan seeks to maintain several elements of the historic campus: the Chapel of the Divine Compassion, the Mapleton house at its present location and the west wing of the convent that faces North Broadway, There are 13 acres of the site that have historic designations. The original proposal was to move the Mapleton house from the southern portion of the site to the northern portion of the property and for 10 story-buildings to be constructed at the rear of the property.

The revised plan preserves the open space abutting North Broadway and the street view of the property. The public will have access to the roughly 2.3-acre front lawn, Null said.

The RM1.5 zoning of the property allows for one home per 1,500 square feet that would have permitted 467 three-story units in no taller than three-story buildings.

There would be no access from Ross Street, at the rear of the property, except for emergency vehicles.

Council President Nadine Hunt-Robinson said the workforce housing should be affordable for such individuals as a barista or a cafeteria worker at the Pace University Law School.

Councilman Justin Brasch responded to the fact all the proposed housing would be rental units. He said he wanted new developments in the city that included homes that could be purchased, not just rented.

Brash said he wanted a park and playground in the open space area in the front of the site open to residents of the neighborhood. Null said his client would work with the city for benches other amenities on the front open space.

Councilman John Kirkpatrick said, “This is an application that I’ve always had my doubts about.” Kirkpatrick said the developer was seeking to leave a portion of the illegal dumpsite as it is. The FEIS needs to provide a comparison on capping the site or removing it, Kirkpatrick said.

Null said the entire construction dumpsite would be capped, not just a portion. The Common Council should be provided with the revised FEIS once it is completed, Kirkpatrick said.

Though representatives of the landowner touted the revised proposal last week, that sentiment was not shared by Stewart Place resident Barbara Allen, who said the development was not consistent with the city’s Comprehensive Plan. “And completely disregards the fact that thousands of people purchased homes in a residential neighborhood,” she said. “The developer’s plan satisfied the mayor’s desire to keep open space on North Broadway, only, but will still destroy the residential neighborhood and property values of the Stewart Ross neighborhood.”

“The developer’s presentation of what remains in the fill area is highly inaccurate and still subjects thousands of area residents to the contaminated fill by any disruption of the landfill on the property, Allen said.