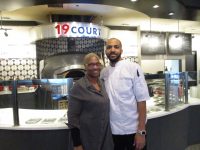 A food hall offers a wide variety of fare that is offered from separate stations.

The new 19 Court restaurant on Court Street in White Plains has its own take on the food hall by serving what it describes as “Artisan Foods.”

Aside from co-owning the new eatery, Rahsaan White is the restaurant’s executive chef and his wife is the chief operating officer.

Rahsaan White said last week that 19 Court is the first restaurant he and his wife have ever owned. “I’ve been a chef for 25 years now and we’ve always opened up restaurants for other folks, so we wanted to open something of our own,” he said.

The restaurant, which is divided up into stations, offers B-Bowls, which consist of various greens, raw or roasted vegetables, beans and a healthy grain such as quinoa or brown rice. The bowl can also include nuts, seeds and dressings. The establishment also sells entrée salads, sushi, artisan pizzas and poke bowls. “Poke is like the Hawaiian version of sushi,” White said. “The rice is on the bottom and then you have all your components laid out on top and then the fish is actually marinated for a quick second in whatever sauce you would choose.”

The most popular lunch items are the salmon and tahini bowls, White said. “Our poke is huge here.”

“The concept of the menu is like an artisan food hall,” White said. “Each station is run like its own separate entity.”

Another feature at 19 Court is its Jazz Weekend Brunch, which is held on Saturdays and Sundays from 11 a.m. to 4 p.m., with live music from noon to 3 p.m. “That’s two of our busiest days here,” White said.

Aside from the weekend brunch, the restaurant offers lunch and dinner. “Lunch is the only counter service,” White said. “For dinner and jazz brunch it’s table service.”

The couple chose the downtown White Plains location because “we were looking to do a business in our own community,” White said. There is another reason why 19 Court St. was chosen. “Starbucks next store is one of my favorite places to go,” White added.

White said his goal for 19 Court is “to be a community space, a place where people can meet up. We don’t rush you out. It’s not about getting people in and out. It’s about people coming here and being able to sit down and enjoy themselves.”