Skip to content
The Examiner
June 7, 2018June 7, 2018 Neal Rentz Mount Kisco
We are part of The Trust Project

Members of the Mount Kisco Planning Board expressed safety concerns last week regarding a proposal to open a preschool in an existing building at 121 Smith Ave.

Current plans call for the renovation of a two-story, 6,234-square-foot building to house The Bedford Learning Center on the first floor.

The property, located in a Cottage Office zone, was originally approved as a non-medical professional office on the first floor with a residential unit upstairs. The upstairs apartment continues to exist. The site plan was last modified in 1975.

The Bedford Learning Center, which operates enrichment classes for preschool-age children in Bedford and Pound Ridge, would provide a new preschool program for up to 16 children between three and five years old. There will be no two-year-old or Mommy and Me classes at the site.

Architect Viktor Solarik said the school is seeking change of use and site plan approvals from the Planning Board.

Village code requires the school to have six parking spaces, but the applicant will request a variance for four regular parking spaces and one handicapped space because creation of a handicapped lift at the front entrance to comply with the Americans with Disabilities Act will require more space, Solarik said. Two parking spaces are set aside for the apartment.

Board members’ key concerns is potential safety hazards during the morning drop off.  Planning Board Chairman Dough Hertz said there needs to be a drop-off and queuing plan submitted by the applicant.

“Without that we’re taking guesses,” he said.

Board member Ralph Vigliotti said he was worried that a very tight space would be made more difficult in the winter after snow is cleared.

Mount Kisco resident Susan Ross, a Bedford Learning Center partner, said there would be a staggered schedule for morning dropping off. To ease the burden, three-year-olds would arrive between 9 and 9:15 a.m. with four-year-olds scheduled for between 9:15 and 9:30 a.m., Ross said. Children would be dropped off to a staff member at the front stairs, Ross said.

Planning Board Vice Chairman John Bainlardi said he had no problem if some parents parked on the street and brought their children into the school. While not ideal, there shouldn’t be safety issues with that scenario, he said.

But Vigliotti said the safety of the children and their parents crossing Smith Avenue to get to the school could pose a danger.

Ross said she is hoping to create a drop-off system. A potential compromise could include having cars enter the property and proceed around the back of the building after drop off. The applicant is hoping to work with a neighbor to allow the school to use their driveway to exit the property, she said.

Ross said plans to open the preschool this September have been scrapped. Instead, she will target a September 2019 launch. Afterschool classes could begin in January if approvals are obtained in time, she said.

“It would be a dream come true to open a nursery school in my hometown,” Ross said. “Because we believe in being part of the community, we plan to offer a few scholarships to children of families that need could use a helping hand.” 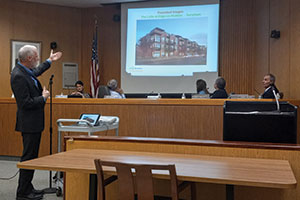