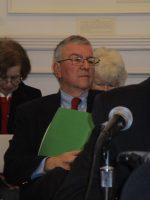 Somers resident Gerry Borreggine was one of the speakers who asked the Town Board on April 4 to pass a resolution calling on the state Legislature to repeal the Reproductive Health Act.

A group of Mahopac and Somers residents is asking the Somers Town Board to follow in the footsteps of the Carmel Town Board and Putnam County Legislature in passing a resolution stating its opposition to state legislation approved earlier this year related to abortion rights.

While Supervisor Rick Morrissey expressed support for a resolution, the remaining four Town Board members on April 4 did not indicate their position on the issue during the public comment period of the meeting, instead seeking to research the issue first.

The residents are seeking to have the Town Board call for the repeal of the Reproductive Health Act (RHA). The RHA states an abortion is legal within the first 24 weeks of the start of a pregnancy or any time after that if a woman’s life or health is at risk or if the fetus isn’t viable. Abortions could also now be done by other healthcare professionals, not just physicians.

The state Legislature, voting along party lines, approved the RHA in January and Governor Andrew Cuomo signed it into law shortly thereafter, leading to outrage among many conservatives across the state and country.

The Putnam County resolution called on the state to “protect the unborn” and criticized the RHA for expanding abortion rights past 24 weeks of a pregnancy that could lead to the “pain and suffering” of the baby in the womb. It criticized the RHA for allowing non-physicians to perform abortions, which the resolution stated could lead to “abuse” and also argued a late term abortion could be performed to protect the health of the mother, but the patient’s “health” is vague and undefined in the law.

All of the residents who spoke during the public comment period of last week’s Somers Town Board meeting expressed opposition to the RHA.

Somers resident Gerry Borreggine strongly opposed the law. “The law added a ‘health’ exception to New York law so that abortions are now legal in the final three months of pregnancy to protect a patient’s ‘life or health,” he said. “Health can include factors such as physical, emotional, psychological, familial and a woman’s age – relevant to the well-being of the patient.”

“A woman and her abortionist now have the right to choose … death,” Borreggine added. “At 24 weeks that baby has a heartbeat. Brainwaves can be recorded. That baby has arms, legs, fingers, toes.”

Borreggine compared abortion to slavery and urged the Town Board to express opposition to the new state law. “All that is necessary for evil to succeed is that good men do nothing,” he said.

Another critic of the RHA last week was Mahopac resident Margaret Doherty, who also objected to the provision in the state law allowing for abortions in the third trimester. Many people locally and nationally have spoken out against third trimester abortions, she said.

Somers resident Kathryn Philopena said the town should follow the lead of the Putnam County Legislature and ask the state to overturn RHA.

Morrissey said he opposed the RHA. The Town Board has recently banned vape shops and is ready to ban the sale of marijuana if the state Legislature approves the legalization of the substance and should consider a resolution to the state expressing its opposition to RHA, he said.

“It’s important for us” to express its feelings to the state about the new law, Morrissey said. “This is a Home Rule state,” he said, adding the Town Board could use the Putnam County legislation as something to approve.

Councilman Thomas Garrity said the RHA was not an agenda item. “We don’t have all the information,” he said, adding the issue should be addressed on a future Town Board meeting agenda.