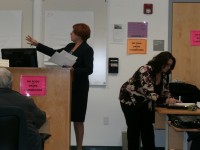 The discussion for the future of Tilly Foster Farm continued last week, as concerned residents teamed with Putnam County officials to cultivate ideas for the county owned farm.

The county held the second public forum for the farm last Thursday afternoon, giving residents the chance to once again voice their opinion as to what direction the farm should go in. After a general discussion inside the Training and Operations Center on the Donald B. Smith campus, residents and officials were broken up into two groups to further address certain aspects of the farm.

Deputy County Executive Bruce Walker, who was leading the forum, said the purpose of the forum was to have the 11 sub-committees come up with the ideas and that those ideas would be relayed to the Tilly Foster Task Force Core Team (TFTT) ultimately in charge of restructuring the farm.

Comments, questions, and ideas ranged far and wide between the two groups that discussed the farm in two separate rooms. These ideas were then handed over to the TFTT Core Team.

One issue that came up was the severe lack of parking and public restrooms on the site of the farm, which could limit Tilly Foster’s potential to attract visitors, especially from outside of Putnam.

Other ideas included bringing in restaurant services and a farmer’s market onto the property, bringing in certain farm animals like horses, a possible bed and breakfast establishment, and having multiple programs that would draw three generations of visitors to Tilly Foster.

County Chamber of Commerce president Bill Nulk, who is on the TFTT Core Team, said afterwards that bringing surrounding businesses into the farm could give both the businesses and farm a boost.

Marjorie Keith, the chair of the education committee said her group brainstormed programs related to agriculture, equestrian, health and education. She added preserving the “agricultural integrity of the farm” was important to residents.

“We’ve got a lot of ideas,” Keith said. “Now it’s sorting through those ideas and determining which are viable ones.”

Equestrian chair Marge Thorpe also said the meetings between the two groups might have been more productive if each committee was broken up into its each group.

“Today was pretty productive,” she said, but. “I think when you put a whole bunch of people in a room together coming from all different directions its hard to get something done.”

At the previous public forum, on Feb. 27, the county executive administration revealed its hopes to have a concrete plan on the table for the county legislature by early May. Walker said at the most recent forum that remains the schedule.

Walker said he’s “pretty confident” with the mix of volunteers and professionals working on the project that the county can “come up with a plan for 2014 with a vision beyond that.

Walker said it could be a phase-in restructure because the county still must go through the RFP process if Putnam was looking to attain certain services for the farm.

“I know it’s an aggressive schedule, but we have a responsibility to make decisions that are going to be fiscally sound and make that farm as viable as possible,” he added.