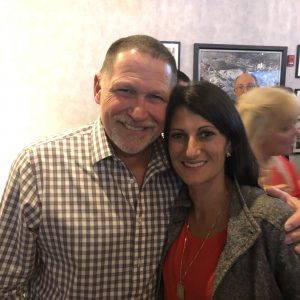 Jerry Schulman and Danielle Zaino were the winners Tuesday night in the race for the Mount Pleasant Town Board.

The Town of Mount Pleasant will return to an all-Republican Town Board next year as Jerry Schulman and Danielle Zaino both claimed victories Tuesday night.

The unofficial results from the Board of Elections had Zaino with 4,221 votes followed by Schulman with 4,141. Incumbent Francesca Hagadus-McHale garnered 3,786 votes and fellow Democrat Laura DiVenere received 3,623.

“I am overwhelmed by all the support we received,” said Zaino, speaking in Thornwood at the gathering of Republicans whom she and Schulman thanked.

Both first-time candidates said they were “amazed” at the logistics of a political campaign and appreciative of everyone who pitched in to help.

“They are the unsung heroes,” said Schulman. “They deserve the glory.”

Though polls closed at 9 p.m. and results started trickling in soon after, outcomes were delayed by the wait for the early voting numbers, which weren’t posted until about 11 p.m.

The Democratic slate had gathered in Sleepy Hollow to await the results. At 10 p.m. with the early voting tallies not yet available but unofficial district numbers indicating a loss, Hagadus-McHale and Divenere conceded and thanked their supporters.

Hagadus-McHale, who last year won a special election to become the first Democrat on the Mount Pleasant Town Board in 30 years, commented on how many people it takes to run a campaign and thanked everyone who helped.

DiVenere said the effort put her in contact with so many fellow town residents that she otherwise would not have encountered.

“This has been a good experience,” DiVenere said. “As I’ve always told my kids, don’t be afraid to take a chance. Just never be on the sidelines.”