IT’S COOL TO BE A NERD, JUST OWN IT

Eric Webb loved comic books as a kid growing up outside of Albany in the 1980s and 90s.

But he worried about the social implications of embracing the interest.

Webb’s young self faced a decision: Proudly be himself or hide?

He chose to keep the passion a secret.

“I ended up giving up that big part of my life for a long time for the sake of being ‘cool,’ or at least not just being a total nerd,” the 41-year-old Webb recalled.

Westchester’s Random Farms Kids’ Theater, a nonprofit, is on an anti-bullying tour, as the group performs “#justbeyou,” a show Webb co-wrote with a partner.

Aimed at fourth to sixth graders, student actors are performing the show at four area schools.

They already staged “#justbeyou” earlier this month at Eagle Hill School in Greenwich, Ct. and at Anne Hutchinson School in Eastchester. This week, they visit Hillside Elementary School in Hastings-on-Hudson on Wed., Oct. 26 and soon they take the tour to Armonk, performing at Wampus Elementary School on Thurs., Nov. 3.

In fact, you might just recognize the description of the show’s main character:

Jordan is a member of the “Comic Crew,” and resides at the bottom of the social ladder. But a new app takes his middle school by storm, and Jordan seizes the opportunity to gain status. When a popular girl makes an enticing offer, Jordan confronts a moral dilemma — friendship or popularity?

“In terms of how we approached it, we wanted to tackle some of the universal themes of bullying, self-esteem, identity, and acceptance but also ground it in a very modern context that engages some of the new pressures kids face these days like cyberbullying,” said Webb, who penned “#justbeyou” with writing partner Stephanie Bianchi, the composer and lyricist for the show. “We wanted our main character to be approachable, but flawed. They are not just a victim in this story, rather they are forced to spend time on both sides of the bullying spectrum.”

One of the most unsettling issues with cyberbullying is how parents are often unaware their children are enduring the taunts. Just one in 10 children will alert a parent or trusted adult about the abuse, according to statistics published by New York State on cyberbullying.

A show performed by children and for children about bullying helps initiate open conversation.

One of those young performers is 11-year-old Sophia Sasso.

“To me being in a show with a message like this is really important,” Sophia said. “So many kids go through life thinking of all they need to change or improve about themselves, and I really hope that with this show they realize that they are already awesome.”

Sophia’s mom, Christie Sasso, vividly remembers the bullying that went on in her middle school in “exquisite detail.”

Sophia entered Fox Lane Middle School as a sixth grader this year. In today’s world, that means increased social engagement on the phone, and all the possible peril that comes with it.

Christie and her husband also have a fourth-grade daughter at West Patent Elementary School. Organizers hope to stage the show at West Patent this spring, although that plan is not finalized.

“I know that with phones and social media, there are even more ways for bullying to occur,” said Christie Sasso, who lives with her family in Bedford Corners. “I really appreciate how this show highlights the role that social media can have in bullying, and I hope that the viewers can appreciate that.”

Erin Hayes, the chairperson of the West Patent Elementary School Association, noted how “creating an anti-bullying environment is paramount for a student’s education.”

“All students deserve a safe and secure learning environment at the bare minimum,” she said, stressing how teaching kindness is an explicit priority for educators at West Patent.

As for Webb, who is also the communications manager at Random Farms, he said writing the show offered an opportunity to “breathe a bit of life back into that younger me through Jordan.”

Kids and adults alike need a reminder that it’s “cool to like or be whatever you want,” Webb observed.

Those are lessons Webb can teach at home to his five-and-a-half-year-old child. In fact, it’s safe to say his wife, Julie Schwartz Webb, trumpets the same message. She’s the director of #justbeyou” and also works at Random Farms. Their child loves the show, and is “constantly making us play the demos at the dinner table,” Webb said.

“Being your unique self is the ultimate in coolness,” he concluded. 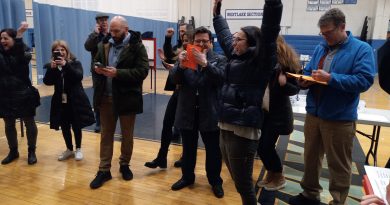