Growing up in Mount Kisco, Lindy Day developed her love for music while attending Fox Lane High School. She moved west and spent nine years in California.  Lindy pursued her love for music by playing guitar for various rock bands and developing a large following on Instagram with Lessons With Lindy.  I sat down with Lindy at Mimi’s Coffee House in Mount Kisco to discuss her musical journey. 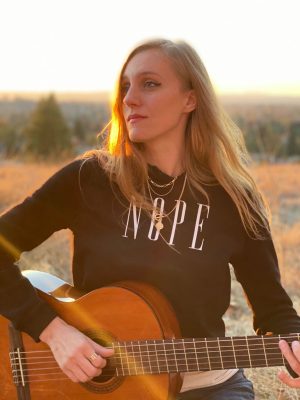 How did growing up in Mount Kisco help with your choice to pursue a career in music?

There are many opportunities in music in the Northern Westchester area.  The Fox Lane Jazz Band provided lots of opportunities to play at Jazz festivals and competitions.  Fox Lane also provided music opportunities in the form of the Battle of The Bands which started my journey as a guitarist. I feel that Fox Lane was very supportive of musicians.

My Dad would take me to these underground Jazz clubs in New York City.  He would have me sit in the front row, and I was totally immersed in the terrific musicianship that I witnessed.  My dad wanted me to see some terrific saxophonists since that was the instrument I was playing at Fox Lane. My dad would also play Jazz music around the house which lead to a better understanding and appreciation of the genre.

During my early teens, the Emo music movement was popular, and all of the people in the counterculture of the Emo scene were influential. Like most teens, I moved away from the music of my parents and became more interested in what my friends were listening to.

I attended SUNY Plattsburgh for a short time and was not sure of what I wanted to do educationally.  The adults in my life wanted me to pursue a career outside of music because they felt there was a better chance of me earning a living, but music kept pulling me in that direction.

You made the decision to move to California.  What influenced that decision?

I had relatives who encouraged me to visit and explore California.  After I arrived, I liked what I saw, and they offered me a place to stay.  I was able to reconnect with my grandmother, who is a music lover, and encouraged me to pursue my dreams and focus on music. I have fond memories of her helping me to learn piano chords as a young child.

You remained in California for 9 years. What were some of your experiences in music?

Shortly after my arrival, my grandparents encouraged me to seek out opportunities to play at small venues and helped to facilitate this with their support of my music.

My first gig was playing classical guitar at a local restaurant.  I frequented the restaurant and established a relationship with the owner who hired me to play on a regular basis.

I started to get more into rock guitar in 2012-2013 and learned about Instagram.  I started posting lessons on how to play classic rock solos. I saw that I had 7000 followers in a relatively short period of time.  Musicians in California started to share my Instagram with others, and as a result, this opened up more opportunities for me to join bands, and play live.  Over the years, my Instagram has grown to over 41,000 followers. 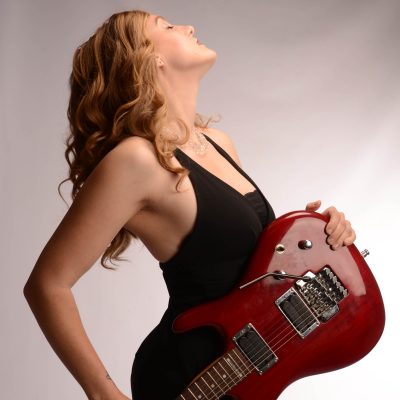 The formula I use is to make short guitar lessons that focus on educating people. I try to not tell them exactly what they need to do as a guitarist, rather, I show some techniques that may expand their knowledge of playing the instrument. I use a simple approach using my iPhone and an audio interface, and use graphics and text to further illustrate a concept.  The goal is to reinforce the lessons in as many ways as I can.

I mix educational content with humor-based posts that many people can identify with. One of my humor-based posts actually got over 700,000 views, which is the largest number of views of any video that I posted. This has helped to grow my channel even outside of people interested in playing guitar.

What are the additional benefits of having a social media presence?

It provides me with the opportunity to approach companies in the music business that may offer me an opportunity to monetize my efforts. For example, a company that makes Guitars might want to pay me to use their guitars in one of my instructional videos. Many people use their Instagram presence to promote additional fee-based internet lessons. I also teach private lessons; many of my students initially learned of me from my Instagram.

What are your goals for the future?

I would like to increase my presence on Instagram.  I am also focusing on using TikTok, which has grown to 55,000 followers.  I am working on writing and producing a number of singles that I would like to promote. I recently applied to Berklee College of Music to be surrounded by people who have similar goals, specifically, being part of a high-energy rock band that tells visual stories that talk about issues that matter to me and others.

Lindy will be performing at Mimi’s Coffee House in Mount Kisco on Sunday, December 4 at noon. You can follow Lindy Day on:

Art Nelson is a musician, videographer, and photographer with 30 years of creative experience. His current music-related activities include writing original music, performing at local venues, and photography/videography of other musicians. 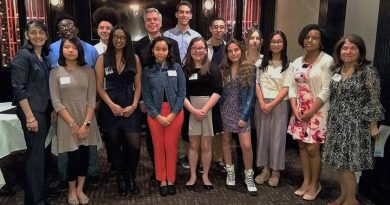