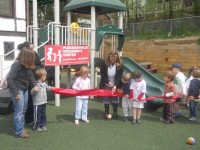 At the start of the school year, the Pleasantville Children’s Center was ready to celebrate its 40th year.

There was one problem that threatened to put a crimp in the milestone: a large tree near the preschool’s playground came crashing down during a storm. No one was hurt but the act of nature damaged equipment and forced the school to close the area.

Last week the center held a formal ribbon cutting for the re-opened playground, complete with new equipment and a rubberized surface that replaces the longtime sand that helped cushion falls.

“It was an unfortunate occurrence but it’s kind of a celebration that we’re starting up with this new playground,” said Maria Peters, the Pleasantville Children’s Center board president. “Hopefully, it’ll last for the next 40 years.”

The center has spent its four decades at the Presbyterian Church on Bedford Road. Although there isn’t much room to spare since the school has only two classrooms, the staff of about 10 makes it work, Peters said. The program for the two-year-olds and three-year-olds are held two and three days a week, respectively, while the class of four-year-olds attends five days a week. There are currently about 60 children who attend class in the three grades.

Denise Starr, the current teacher for the four-year-olds who returned after teaching in the public schools, said a successful preschool such as Pleasantville Children’s Center is able to shape children into lifelong learners. For her, the preschool years is where it’s at.

“You try to engage them to be curious about the world, about everything,” she said.

Next year’s board president, Nicole Callahan, said the school provides a sense of community, particularly with the board being comprised of parents with children in the school. It also allows families to have more input into the child’s education, she said.

“I think the kids feel good to know their parents are involved and that they’re part of the town,” Callahan said. “They visit the firehouse, they visit local community businesses. It provides them with a sense of security and a sense of a home away from home that they can come to and feel safe and comfortable.”

To help commemorate the school’s 40th anniversary, Pleasantville Children’s Center has scheduled a cocktail party and silent auction fundraiser for Friday, May 4 at the Marmaduke Forster House in Pleasantville. The public may attend the event.

Peters, a Pleasantville resident who has seen her children go through the school, said she and many other families have been fortunate to have a quality preschool close to home.

“I can’t imagine sending my kids anywhere else,” Peters said. “They’re just a sweet gem of a school. The teachers are fantastic. They’re absolutely spectacular. They address every need that you can think of–the nurturing, the loving, obviously the academics for the want of a better term. We’re really, really lucky.”