Skip to content
The Examiner
April 1, 2014April 1, 2014 Adam Stone Pleasantville
We are part of The Trust Project

The sudden development came after the New York State Department of Transportation (DOT) gave village officials new information at 5 p.m. Monday detailing how the retaining wall on the property, which Benchmark had planned to cut into to develop their driveway, was on a state right-of-way.

In an email, the DOT indicated that the applicant may need to cut into the hill and move the wall 10 deeper into the site and construct a sidewalk. That could result in a change to the Benchmark site plan and require the state Environmental Quality Review Act (SEQRA) to be reopened.

It was not clear on Monday night if reopening SEQRA will be necessary, but the board agreed that it would be inappropriate to take a vote on rezoning the 3.9 acres without obtaining more information.

“We feel as though we have a tremendous amount of information, and we’re ready to vote, but this has thrown a wrench into the works, especially if it raises the possibility that some of the information we have all collectively relied on may change,” said Mayor Peter Scherer.

Representatives from Benchmark, who have already been through a 15-month process, agreed that the vote should be postponed, pending further discussion with DOT.

“We certainly want to get to the bottom of this issue, and we’re certain that we will be able to do so promptly,” said Benchmark attorney David Steinmetz.

The postponement of the vote means that Trustee Brian Skarstad, who leaves the board today (Tuesday), will not get an opportunity to vote on the proposal. Instead incoming Trustee Steven Lord will vote on the rezone. The resolution will need a fourth-fifths majority to pass.

Monday’s meeting followed a week where legal issues raised by residents regarding the concept of a floating zone and whether or not it constitutes spot zoning. Michael Sirignano, an attorney representing resident Jurji Parazczak, submitted a letter to the board at the March 24 public hearing stating the legal concerns that his client held about the Benchmark project. Along with spot zoning, Sirignano noted that current zoning laws prohibit assisted living centers that accommodate more than 12 people. In addition, he stated that the village’s Master Plan does not address the issue of floating zones. He asserted that without that language the result would be unpredictable.

Siriginano pointed out that while there is only one application for the floating zone right now, a developer could buy multiple properties and accumulate the required acreage to fit the zone’s requirements in the future.

Trustees have noted that such a scenario is theoretically possible but the applicant would still have to buy the land and go through an approval process.

In addition to distributing flyers to rally Pleasantville homeowners to fight against Benchmark, residents opposing the project held two meetings last weekend drawing dozens of residents to discuss what could be done to stop it.

“Nobody I spoke to was in favor of the facility and some were downright upset about the floating zone, which they think is an underhanded method of creating zoning despite it being legal,” said Parazczak, who attended both meetings.

Residents agreed that while the idea of an eldercare community was a good one, they noted the problematic location. There is community preference for single-family homes since that is what the area is currently zoned for. Board members have pointed out that single-family homes had been previously proposed for the site but was opposed as well. 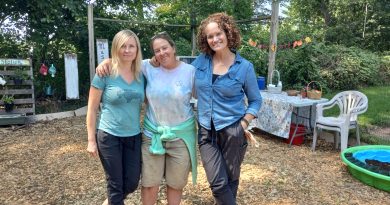