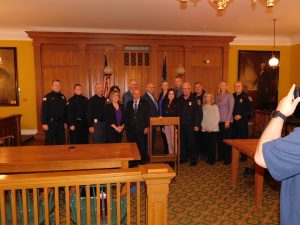 Members of various Putnam County law enforcement and social services agencies, and other advocates, show support for the Putnam County Domestic Violence and Sexual Violence Task Force during a press conference Nov. 18 at the Historic Courthouse in Carmel.

After a five-year hiatus, the Putnam County Domestic Violence and Sexual Violence Task Force is coming back strong – and increasing in ranks.

Members of the Putnam/Northern Westchester Women’s Resource Center, the county District Attorney’s Office, the sheriff’s department, probation department, and numerous local police departments and law enforcement agencies gathered Nov. 18 at the Historic Courthouse in Carmel to let the public know that domestic violence, sexual abuse and human trafficking will not be tolerated.

“There is nothing worse than witnessing abuse,” said District Attorney Robert Tendy Jr. “It’s not until you actually live it that you realize something is viscerally wrong.”

After a grant that came through the probation department to fund the task force expired five years ago, the group fizzled out. However, Ann Ellsworth, director of the Women’s Resource Center, recently got the gang back together.

When Ellsworth reached out to her colleagues, the response was immediate. “It took one meeting for everyone to say ‘yes,’” she said.

The purpose of the task force is to empower victims to seek help for themselves, or others who may be in need of assistance. The agencies associated with the task force will share statistics, aggregate data, and perform educational awareness and training in communities that are believed to have residents who need services.

“Whenever one person hurts another, we’re here for that victim,” said Ellsworth.

Tendy called domestic and sexual abuse a form of slavery that inflicts not only physical, but psychological torture on a victim, as well as “spiritual annihilation.”

And it happens more often than most people realize.

“At any point in a day, you’re probably sitting next to someone who is touched by domestic violence,” he said. “This task force is a place they can turn to.”

Putnam County Sheriff Robert Langley Jr. said no one is immune to domestic violence and sexual abuse – despite gender, age, race, sexual orientation or socio-economic status. “A lot of victims are ‘groomed’ and they don’t realize they are the victims of a crime,” he said.

And for the sheriff, failure is not an option. “If we fail, we are not just failing ourselves, we are failing the victims,” he said.

Brewster Police Chief John Del Gardo explained that the Brewster community has a lot of immigrant residents who come from countries that don’t have as sophisticated laws as the U.S., and these individuals don’t realize that certain behavior that may be acceptable from their country of origin won’t fly here.

“They don’t know our laws; they don’t read our newspapers,” he said. “They are doing whatever was OK in their country. What they were doing there, they are doing here.”

Del Gardo said many offenders don’t even realize they are doing anything illegal. “Fourteen-year-olds are not off-limits in other countries,” he said. “We are more refined in our laws.”

The police chief said he is hopeful this task force will not only support victims, but educate the community. “This is going to be a great thing,” he said.