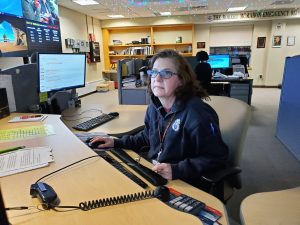 Imagine a job where your actions in the first few seconds after you pick up the phone can impact lives.

That’s the reality our members working as emergency dispatchers face each day they report to work, sit down at their consoles and prepare to answer the public’s calls for help.

“We have to find common ground with the person calling right away,” said CSEA member Heather Fox, a dispatcher at Putnam County 911. “You have to build that rapport quickly, because you have to gain the caller’s trust to get them to do what you need them to do, whether it’s a CPR or choking call, instructing a caller on how to use Narcan, or another emergency.”

Her expertise in doing that recently earned Fox a prestigious honor, the Dispatcher of the Year Award from the Atlantic Chapter of the Association of Public Safety Communications Officials. Fox was chosen for the award from a pool of nominees across eight states.

“I am very humbled,” said Fox. “This is really a reflection on our entire team at the Putnam 911 Center. My mentor from my first dispatching job used to say, ‘we swim as a team, we sink as a team.’ As dispatchers, we work as a team, and we are also part of a greater team working with our police, fire and ambulance personnel.”

While dispatchers’ work is done primarily behind the scenes, Fox has made it her mission both to educate the public and help fellow dispatchers sharpen their skills through training.

Fox presents the national 911 for Kids program in Putnam County, which features mascot Red E. Fox teaching children when they should and shouldn’t dial 911.

She also serves as a trainer for new dispatchers at Putnam County 911, in addition to writing curriculum for continuing education classes there. After attending the APCO conference this past November in Falmouth, Mass., where she received her award, Fox returned with new information and data she hopes to draw upon for future classes.

While she prefers to emphasize the teamwork at the Putnam 911 Center rather than the award she received, Fox said she appreciates the chance to highlight what the job of a dispatcher actually entails.

“I think some people have the perception that we’re just answering the phone, but the reality is we do a lot of multi-tasking,” said Fox. “The job requires very good communication skills because you have a lot thrown at you at once. It’s not for everyone, but the job is an important part of public safety in our communities. No matter how busy we get, knowing we’re helping people is extremely rewarding.”

As a result of her job in Putnam County, Fox has become active with Team Rubicon, a non-profit organization that sends veterans to areas stricken by natural disaster, where they assist with relief and recovery at no cost to the people they help. A group of volunteers from Team Rubicon came to Putnam County after tornadoes struck several years ago, during which they stayed at the 911 Center.

“I signed up while they were still here in Putnam County,” said Fox, noting that the organization also accepts civilians. “I deployed to Panama City, Fla., after a hurricane, and did two deployments down there. I ended up doing knockouts, where we would clean out a flooded house, taking the wall down to the studs. It was amazing.”

The chance to help the public outside the walls of the 911 center was a transformational experience for Fox.

“As dispatchers, we don’t see things, but we hear them and we’re a part of them,” she said. “For me to actually go on an operation, it was very different for me and rewarding.”

Jessica Ladlee is the communications specialist for CSEA’s Southern Region.