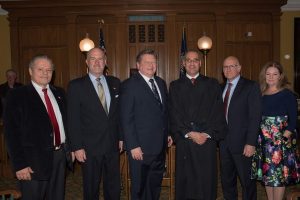 Putnam County celebrated newly elected and re-elected officials during a Dec. 31 swearing-in ceremony at the Historic Courthouse in Carmel.

“We know here in Putnam that your local government is really the backbone – it’s really where the people we represent are here to interact with us,” said County Clerk Michael Bartolotti in his opening remarks.

“The folks who we serve are like our customers, and we have to make sure we do the best we can to ensure that their needs are met. All the public officials here really abide by that and really make sure we all do our very best to make sure we take care of the citizens who have elected us, that have trusted us to serve as their public servants.”

Three legislators took the oath of office after being re-elected in November.

Legislator Carl Albano, R-Carmel, expressed gratitude for being re-elected. “I’m fortunate – I never imagined that after this many years I’d still be a legislator,” he said.

Legislator Paul Jonke, R-Southeast, thanked his colleagues for their support and guidance, as well as their hard work.

“And thank you to the voters in the sixth district in the Town of Southeast for your confidence,” he said. “I look forward to exciting jobs going into the future. I pledge to continue my efforts to deliver quality services while minding the tax cap and respecting the taxpayers.”

Neal Sullivan, R-Carmel, thanked the Republican, Conservative and Independence parties, and their members, for their support and confidence in choosing him as their representative.

“I’d like to thank the county executive and her staff and all the department heads for working with the Legislature during the year to get things done, working together, focusing on getting the right thigs done for our constituents,” he said. “Not spending a lot of time on bartering back and forth, but focusing on pushing the ball forward and getting things done in Putnam County.”

District Attorney Robert Tendy, who was also re-elected in November, said he loves going to work every day, in part due to the dedication and hard work of his staff.

“Four years ago I said I wanted to make it the best District Attorney’s Office in the state, and we’re pretty damn close,” he said. “It’s great to be part of this legal system, and now for the next four years, our job is to continue to safeguard our community.”

“We’ve worked together the last 13 years,” Jacobellis said of his relationship with Spofford, who previously served the Carmel Town Court. “We’ve gone from co-judges and you being a mentor to me, to being a loyal and trusted friend. I just truly know how much you wanted this. I’m proud of you and I just know you’re going to be a great County Court judge.”

Spofford thanked the Republican and Conservative Party chairmen for their support, as well as Supervising Family Court Judge Joseph Egitto of the Ninth Judicial District. “It’s going to be a pleasure for me to serve under you,” he said.

“The public must be confident that their judges not only have a command of the law, but that justice is blind,” said Spofford. “In Putnam County, we are blessed to have a judge who maintains the highest standard of judicial integrity, in judge Rooney.”

She also recognized the late, and beloved, Putnam County Court Judge James Reitz, who passed away unexpectedly in June.

“Because he was a true public servant, but he also believed very strongly in citizenship, he would say to us, ‘Let our New Year’s resolution be this: That we will be there for one another as fellow members of humanity in the finest sense of the word,’” said Odell of Reitz. “That, I believe, describes who our honor was.”