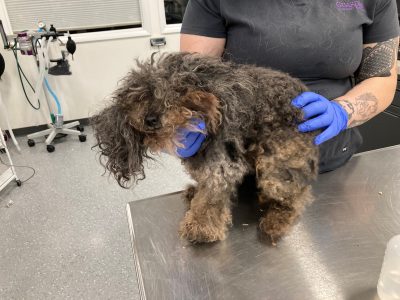 The Putnam County SPCA is seeking information regarding the owner of an emaciated male, mini poodle, mix breed dog found Monday on Chief Nimham Road in the Town of Kent.

At about 6:15 p.m., a good Samaritan contacted the Kent dog control officer about a loose dog limping down the road. The officer responded immediately and retrieved the poodle, which was in a severe state of neglect.

The dog was taken to Guardian Veterinary Specialists in Brewster for emergency care, where the attending veterinarian found the dog to be extremely emaciated with its fur severely matted. The matting was so severe it wrapped tightly around the dog’s legs and feet, causing difficulty for the dog to walk normally.

The dog also was suffering from malnutrition, dehydration and it teeth had severe dental disease. In addition, the dog was unable to see through the fur covering its eyes and the skin under the matting was raw and inflamed. The dog’s ears were also infected.

Due to the neglected shape the dog was in, the Putnam County SPCA Law Enforcement Division has opened a criminal investigation and asks anyone who might know where the dog came from to contact the SPCA at (845) 520-6915. The hotline is open 24 hours a day and all calls will be kept confidential.

“This is one of the worst cases of matting that we have encountered,” said SPCA Chief Ken Ross. “As the fur mats, it pulls away from the skin, causing constant physical pain for the animal. The matting retains water which irritates the skin further as the matting constantly rubs the skin raw.”