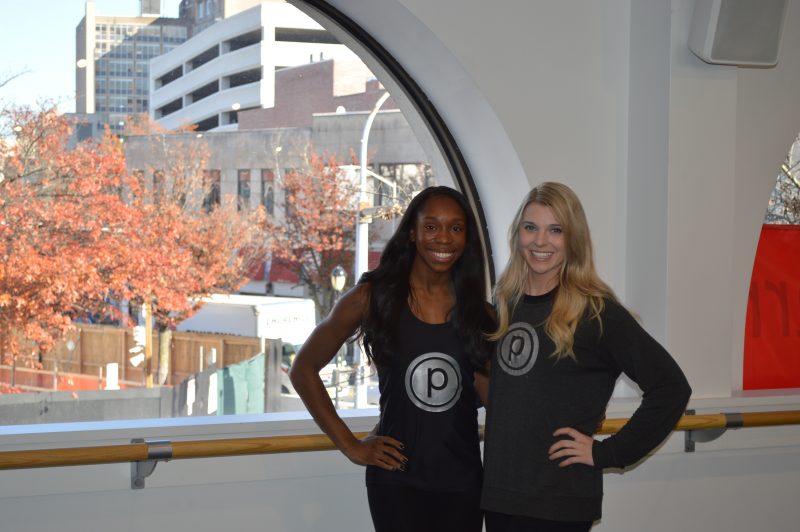 Caitlin Muldowney met Ashely Allen when Muldowney taught at the Pure Barre in Greenwich, CT, which has been owned by Allen since 2012.

The duo, which reside in Stamford, CT, are seeking to translate the success of the Greenwich facility in White Plains, which opened on Sept. 23. “We knew that White Plains was in need of a Pure Barre,” Allen said last week.

Pure Barre is a national chain that began in Michigan in 2001. It provides 50-minute, full-body workouts throughout the day, typically from 5:30 a.m. to 7:50 p.m., to accommodate their customers’ work schedules and for convenient times for retirees, Muldowney noted. Classes are intended for those 16 and older, she said.

The workouts include such aspects as isometric contractions, muscular endurance exercises, the use of small weights and other exercise equipment and exercises at the barre, which resembles a barre used by ballet dancers, Muldowney said. “It a fusion of ballet, Pilates and yoga,” she said. “Pure Barre does cater to all ages. It’s also very safe on the body. The workout is low impact.”

“Anybody can do Pure Barre,” Muldowney said. “We hit all major muscle groups,” she said. It is a misconception that a person needs to be a dancer or have a flexible body to participate in Pure Barre classes, she said.

Allen said most of her customers either live or work in White Plains.

Muldowney said she enjoys doing the Pure Barre exercises and teaching in the group experience. “The best thing is being inspired,” she said. “You can feel the energy of the person that’s next to you. But at the same time you’re still focusing on and keeping your own zone to get your best workout.”  In addition, the classes provide a mental break from other things going on outside of the studio and participants feel the support from others taking the class, she said.

“The best part of taking a class is actually the results,” Allen said. “It’s the only one I’ve felt the best results in not only in my physical fitness but my self-confidence.”

“The best thing is just for anyone is to come and experience a workout even if they have not thought of joining a Barre class,” Muldowney said, adding that a free introductory class is slower paced than the typical class.

The White Plains Pure Barre is located at 140 Mamaroneck Ave. For more information call 914-266-1664, visit https://www.purebarre.com/location/white-plains-ny or send an e-mail to whiteplains@purebarre.com.