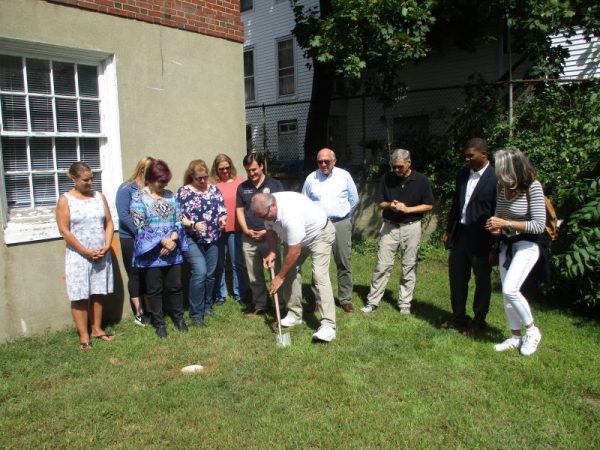 The Brewster Public Library Board of Trustees, local elected officials and residents came to the library on Sept. 8 to participate in a groundbreaking ceremony for the facility’s expansion project.

In November 2017 residents approved a bond to allow the library to borrow up to nearly $3 million for the library’s expansion project, which library officials say will double the size of the facility.

The expansion will include creation of a community room to accommodate up to 50 people, private study rooms and an Americans with Disability compliant elevator and restrooms. The project will also include the renovating of the interior and upgrading electrical and HVAC systems.

As stated on the library’s website the project will be “respecting and retaining the historic façade of the building and the main reading room.”

At the Sept. 8 ceremony, library Board of Trustees president Peter Carey, who was accompanied by library director Gina Loprinzo and members of the board, said the expansion project has been in the works for about seven years.

“We finally got all of our approvals in place,” Carey said. “I want to thank the voters, the townspeople of the Town of Southeast. We came to you two years ago. We put a bond proposal up and you overwhelmingly supported the library and we thank you so much for that and we hope to give you a library for the next century.”

Jordan Hardy from state Sen. Peter Harckham’s office provided the library with a proclamation to honor the library expansion.