Skip to content
The White Plains Examiner
April 2, 2013 Pat Casey 214 Views 3 min read
We are part of The Trust Project

At the first meeting of the White Plains Common Council in April, the proposed budget for the ensuing fiscal year is presented by the budget director, setting off a series of review meetings and a public hearing culminating in adoption of a budget by the thirtieth of May.

Keeping within the state mandated 2 percent tax cap for property tax levies (the proposal comes in $260,000 under the cap), the proposed budget suggests a tax rate of $192.22, an increase of $7.75 (4.2 percent) per $1,000 of assessed property value. That would mean a single-family homeowner with a median assessed value of $13,400 would pay an additional $104 in city tax during the next fiscal year.

With the assessed value in White Plains up $2.2 million over the previous fiscal year (from $275.6 million to $277.7 million), indicating a leveling off of tax certioraris, which had plagued the city since the onset of the national economic crisis, the overall message of the budget is one of continued financial healing and stabilization.

The property tax roll is the largest revenue source for the city, representing 33.9 percent of total General Fund revenues with a tax levy of $53.4 million. 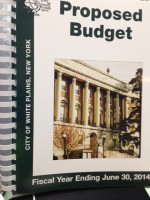 With the downtown Business Improvement District included, the number is $54.1 million and still remains within the tax cap.

The $2.2 million increase in taxable assessments allowed the city to generate approximately $417,000 of revenue and therefore allowed the tax rate increase of 4.2 percent rather than 5 percent.

Genito noted that on top of the $1.9 million pension fund increase, $693,113 annually goes to pay off amortized pension costs.

Unrestricted sales tax revenue of $45.4 million ($5 million is set aside annually as a mandated reserve), represents 28.8 percent of the total General Fund.

Parking related revenues of $22.5 million in the form of meter fees, fines and permit charges represent 14.3 percent of total General Fund revenues. Increased revenues will be generated with a 25 cents per hour parking rate increase at all city-owned parking garages and lots.

The proposed budget includes intergovernmental grants and aid of $7.2 million, representing 4.5 percent of the General Fund, of which $5.5 million is estimated to come from New York State Aid and Incentives to Municipalities (AIM) and $1.4 million will be generated from New York State Mortgage taxes.

The 2013-14 proposed budget maintains most city services at levels comparable to prior years. The White Plains Public Library will have hours restored on Thursday nights.

No staff raises or layoffs are planned at this point in the budget process. Genito did comment that Police and Fire negotiations had just entered arbitration and any resulting increases that might come out of those discussions were not considered in the proposed budget.

Genito also said arbitration would most likely continue after the final budget vote had been made.

A complete PDF version of the 2013-2014 Proposed Budget for the City of White Plains will be made available on the city’s website at www.cityofwhiteplains.com. Budget meeting dates and times will also be posted on the city site. The public hearing is Tuesday, May 7 at 7:30 p.m. in Common Council Chambers.