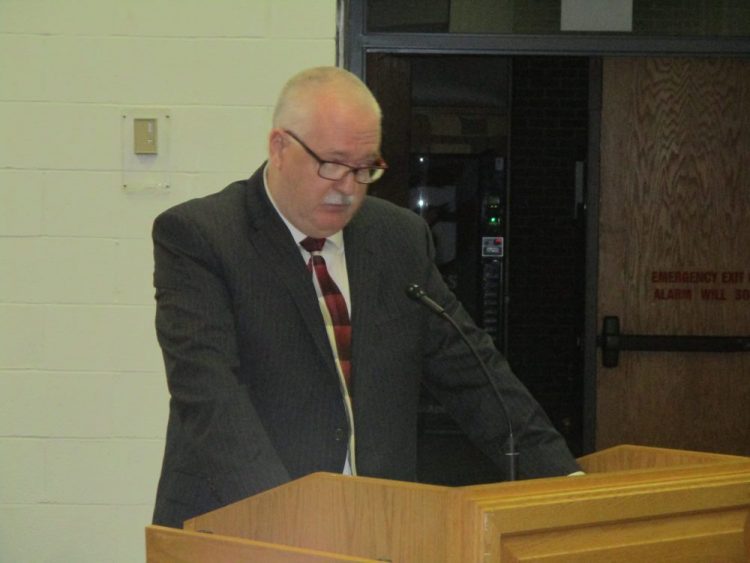 At the conclusion of a heated public comment period at the May 1 Carmel town board meeting, Supervisor Kenny Schmitt called for a state investigation into a land purchase made by the town last year.

The dispute over the town’s purchase of Swan Cove in downtown Mahopac has been a topic of debate in recent weeks as Mahopac resident Robert Buckley and Councilman Michael Barile have verbally jousted over the town’s purchase of the land. Near the end of the contentious public comment period, Schmitt said, “I will send a letter and I’ll request an inquiry into the purchase of the Swan Cove property” with Barile agreeing with Schmitt and expressing confidence that the purchase was above board.

Several March lohud articles scrutinized Barile’s actions over Swan Cove, a lakeside property in the town purchased last year for $1 million in hopes of turning the parcel into a park and providing more parking for patrons. Barile pushed hard for the deal, but according to lohud, did not disclose to other town board members that the property owner at the time, Frank Cotaj, did not have certain permits if he wanted to build on the land. By not having those permits, the price tag for the parcel could’ve been less than what the town paid, lohud reported.

During his lengthy speech at a recent town board meeting in March, Barile didn’t hold back bashing Buckley, who is active in local GOP politics and was the former recreation committee chairman, and Mahopac resident David McKay Wilson, who is the reporter that wrote the articles about Swan Cove and Barile for lohud. The battle between Buckley and Barile continued at last week’s meeting.

Buckley said he was not going to respond to the comments made about him by Barile at the March 27 meeting. Buckley said last year his interest in Swan Cove had to do with the town board doing its due diligence before buying the land. The lohud articles stimulated his interest further, Buckley said.

“Mr. Barile, when you sold Swan Cove to the Cotajs, was it fully approved?” Buckley asked.

“In my mind, it was,” Barile replied.

Barile then said under advisement from legal counsel, he was not to speak with Buckley or McKay Wilson, who attended last week’s meeting as well. Barile added he was willing to put his comments in writing, though Buckley argued it was unprecedented that a town board member refused to answer questions from the public.

“The answer to the public is we’ve been conned by Mr. Barile,” Buckley said. He passed out a packet of information with the title “Swan Cove never had Full Approvals” to the town board, town attorney Greg Folchetti and members of the media at the meeting.

Buckley said Swan Cove never had an approval document. Barile and his partners came to the planning board in January 2009 for a 10-unit, 20-bedroom development that would be built on Swan Cove.

On Nov. 28, 2012 Barile received approval for his project from the planning board contingent upon receiving state Department of Transportation permits for water and sewer for the development and sewer approvals from the Putnam County Health Department, Buckley said.

Barile and his partners sold Swan Cove to Cotaj for $725,000, Buckley said.

On Oct. 3, 2017 Gina Cotaj sent an email to the planning board seeking an extension, Buckley said. Ms. Cotaj stated in her email that her project had DOT permits, but not water permits, On Oct. 11, 2017 the planning board approved a one-year extension for the project and on Oct. 19 she told the town’s Environmental Conservation Board that she was waiting for a DOT water permit, Buckley said.

On Nov. 1, 2017 Barile, who was running for office at the time but not on the board yet, made “a passionate speech” urging the town board to seek to purchase Swan Cove, which he said had all approvals that would allow for the development to proceed, Buckley said. Barile’s statement that the project had all the necessary improvements “was an outright lie,” Buckley said, adding the project does not have approvals from the DOT and Board of Health.

Buckley asked town board members if they believed all the approvals had been provided to allow the development of Swan Cove when they voted to purchase the land. Councilwoman Suzi McDonough said the town board was advised by its legal counsel to not comment on the land purchase with council members Jonathan Schneider and John Lupinacci remaining mum on the topic as well.

“This is ridiculous,” Buckley replied.

“Their job is not to answer questions, they can choose to if they want to,” Folchetti said, confirming he advised them not to.

The Board of Health had 24 questions for the partners who owned Swan Cove, but they did not reply, Buckley said.

The town paid $275,000 more for the Swan Cove property than Mr. Cotaj did, Buckley said.

At a recent town board meeting Barile said he should have been at that meeting to discuss the property, but he was on vacation at the time, Buckley said.

“Your imagination and your ignorance and your lackey here with the camera (David MacKay Wilson)… are unconscionable,” Barile replied. “I would never dignify a person like you with a response.”

“Any developer worth his salt knows exactly what happened and you’re just a rabble-rouser,” Barile told Buckley. He also publically encouraged Cotaj to attend a future meeting to defend himself.

“You conned the people of this town Mike,” Buckley shot back.

At times, the meeting spiraled nearly out of control when one of Barile’s daughters and business partners, Nicole Barile Stern, started screaming at McKay Wilson to stop filming into the audience that included her. Barile Stern shouted, “you’re harassing women” at McKay Wilson with Barile criticizing the reporter as well.

“This is probably one of the worse experiences that I’ve had,” an exasperated Schmitt said. “I don’t like the tone this meeting took.”