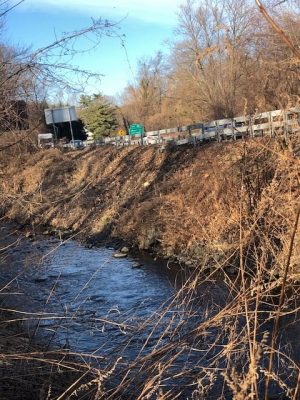 A portion of the Saw Mill River flowing near the Saw Mill Parkway in Pleasantville. This area has the highest average level of fecal pollution of anywhere in the river, according to data.

The Pleasantville Road section of the Saw Mill River has the highest average level of fecal pollution than any other area of the river, according to tests conducted by Sarah Lawrence University and Riverkeeper.

The fecal bacteria in the river may contain pathogens, such as bacteria or viruses, which can make people sick. The fecal cells are known scientifically as enterococci.

The latest test was conducted in October.

The U.S. Environmental Protection Agency (EPA) standards recommend that fecal bacteria not exceed 30 cells per 100 milliliters of water. The Pleasantville Road section of the river tests at 737 cells per milliliter. That figure is a calculation by geometric mean, a type of average of the data analyzed for the years 2015 to 2019.

Epstein warned that swimmers in the Saw Mill who accidentally swallow the water could get sick and suffer from vomiting and intestinal problems. Also, anyone who goes in the river with an open wound on their body could face the risk of infection.

Sarah Lawrence College’s Center for the Urban River at Beczak (CURB) and Riverkeeper experts are currently exploring the sources of the fecal pollution.

“That’s the million-dollar question, where the bacteria are coming from,” said Ryan Palmer, director of CURB.

Sources could be cats, dogs, birds or humans.

“A good, educated guess is that it’s human,” Palmer said.

If the fecal bacteria is coming from humans, the next question is its origin.

Palmer and Epstein believe that it’s possible that towns and villages in the area have sewage lines that are leaking or failing.

CURB will use a newly-acquired device this spring to identify what type of DNA is in the bacteria. It’s called a qPCR, for quantitative polymerase chain reaction.

“The entire stretch of the Saw Mill has levels of fecal cells,” Palmer said. “The whole stream has issues.”

“The Saw Mill River has been profoundly altered by humans,” Epstein said. “It’s been treated poorly.”

“People should expect water that is drinkable, swimmable and fishable,” Epstein added.

The 23.5-mile-long river drains into the Hudson River.

“You can’t have a big, healthy river with polluted tributaries,” Epstein said.

Steve Pucillo kayaks on the Saw Mill and also works with Riverkeeper to test the water for fecal bacteria.

“I don’t put my skin in the water,” Pucillo, a Hastings-on-Hudson resident, said. He wears long-sleeve shirts and hip waders when kayaking on the river.

When asked why he does the testing for Riverkeeper, Pucillo said, “I want to know about what’s in the river.”

Pucillo is passionate about the Saw Mill and its health. He has built houses to shelter ducks, birds and butterflies along stretches of the river. He regularly fishes plastic objects out of the river that motorists driving along the Saw Mill River Parkway throw out of their cars.

Concerning the fecal pollution, Pucillo said “It’s been that way forever. We’re still learning about how to deal with all this.”

“We’re hoping that things will change,” he continued. “I want to see people fishing in the river. I’m an optimist. I have great faith that young people can change things. The Hudson is cleaner than it was 15 years ago.”

The grants must be won through a competitive bidding process by local governments or nonprofit corporations. The state government spent $93 million in 2019 for 85 projects throughout New York.

The vast majority of the 2019 grant recipients were from municipalities upstate and Long Island. Just one Westchester County project earned funding from the WQUIP, a land acquisition grant for 63 acres on Byram Lake Road for source water protection in North Castle.

Pleasantville resident Michael Gold has published op-ed articles about the environment in the New York Daily News and the Albany Times-Union. He has written four books, including “Consumer Culture is Consuming Us” and “God in Crisis – The Destruction of the Environment and its Consequences for Our Relationship with God.”