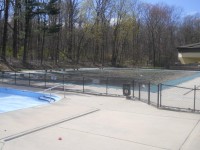 Pleasantville is exploring the possibility of making infrastructure improvements to the village pool.

Last week, the village board met with pool consultant Maurice Wrangell and the Parks and Recreation Advisory Board (PRAB) to discuss the Lake Street facility’s future. Among the most pressing needs to be addressed is preventing water from entering the filter complex and valve room, which causes pipe erosion, and outdated showers and bathrooms. Westchester County Department of Health regulations require the improvements to the pool house.

Officials have also been consulting with its new Department of Public Works Superintendent Jeff Econom on the matter.

“This is not an inconsequential expense,” Mayor Peter Scherer said. “We are aware that the pool house facility needs improvement.”

Scherer acknowledged the showers and bathrooms need renovation, and that the village would like to make the pool more attractive and efficient.

“We are in a resource-constrained environment,” Scherer said. “We need to make improvements at minimal cost and see if it can be funded by the pool, which is a revenue stream. It’s clearly on our radar screen.”

“There are lots of things on the list,” Scherer said. “There are things that we need to do and things that we would like to do. We need to make the distinction between the two going forward to maintain a pleasant and appropriate facility.”

Village officials did not mention how much they would be willing to spend on the pool.

Wrangell has worked with the village before along with other area municipalities. He is considered an expert on how pool facilities operate and on health department regulations.

Trustee Mindy Berard, who has also been heavily involved with the Pleasantville Swim Team, said the village board wants to make improvements that are cost effective.

“The square footage of the pool house is fine,” Berard said. “We don’t need a big giant structure. If we reworked the space we had, it would be a much more pleasant place to go to in Pleasantville.”

The village plans to follow recommendations from the advisory board before getting an estimate from Lothrop Associates of Valhalla, a company that worked with the village on its recreation center and also built pools in Bedford and Mount Kisco.

“I think this is an opportunity,” Berard said. “It’s a tremendous opportunity to not spend millions of dollars, but a reasonable amount of money to make that a public pool that meets the needs of the people going there. It would be a big opportunity to take what we have and make it better.”

Village officials said the expense could at least be partially offset with increased membership. Despite issues at the pool, membership has remained stable for several years.

“This is an ideal time to borrow and bond for money,” Berard said. “If we are giving somebody more, then maybe we can raise our prices a little bit. That’s what we look for to pay for that, so it wouldn’t be such a burden on the taxpayers.”

Trustee Brian Skarstad said the village board only wants to do what is necessary to keep costs at a minimum.

“It’s not sexy to say that we can’t do everything and we have to hold back,” Skarstad said. “People feel we should tear the building down and rebuild it. That’s not something we can do. Could we do more with the pool? Absolutely and undoubtedly we will in the future.”

Skarstad said Pleasantville can’t take a chance on overspending in the hopes that the pool would attract significantly more members.

“The facility only gets used a couple months of the year,” he said. “I understand the argument. We’re a village with 7,500 residents and we’re trying to make it work without tax increases and within the 2 percent tax cap.”