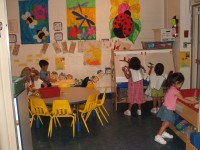 The Mount Kisco Planning Board remained at odds with a couple over the location of a playground for a proposed child care center they hope to open on Radio Circle.

Although Mark and Beatrice Santora provided a diagram of a 3,200-square-foot playground behind the building where they plan to operate the Little Garden Childcare Center, they prefer the area to be located in front, project architect William Spade said. Earlier last month the planning board urged the Santoras to consider moving the outdoor playground behind the building at 27 Radio Circle so it is in a more appropriate area.

But Spade stated in a June 14 letter to the planning board that a rear playground would make it more difficult for staff to monitor the children and be less attractive to parents.

“This rear space is predominately a utilitarian space for parking and building services and is wholly unattractive for a play space,” Spade stated.

To accommodate the board’s request, an existing dumpster would have to be moved close to the playground, potentially creating “unsanitary conditions, odors, vermin and the dangers of sanitation trucks accessing the dumpsters near the playground,” Spade added.

Other disadvantages would include a net loss of 12 parking spaces and no direct access between the rear door and the playground, he said.

Planning board member Doug Hertz thanked Spade for the revised drawing but continued to question the applicant’s insistence that the playground be in front. Hertz said he remained convinced safety would not be jeopardized if it were in the back. The reception desk could be moved toward the rear of the 10,878-square-foot facility to allow staff to do more effective monitoring.

In rejecting Hertz’s suggestion to move the playground, Spade said his client wants children brought in the front entrance by their parents. Also, under the board’s plan, children would have to cross the entrances of the building’s other tenants to gain access to the area, he said.

Board member Ralph Vigliotti said he still wanted the applicant to consider the rear playground. He said it could be shifted five or six feet to the south to save several spaces.

However, board Vice Chairman Anthony Sturniolo, who had previously pressed the applicant to consider placing the playground in the back, said the information convinced him that it should stay where it is proposed

“I wanted to see all the options, the pros and cons,” Sturniolo said.

The couple must obtain site plan and special use permit approvals from the planning board. The center would provide before- and after-school programs for older children

and day programs for preschool children.

The project may also need a variance from the zoning board of appeals if it is determined the center would increase the development coverage of the property, Building Inspector Austin Cassidy said.

A July 10 public hearing was scheduled. At that meeting, the board is expected to review a draft resolution for approval of the project, although it is not scheduled to vote.