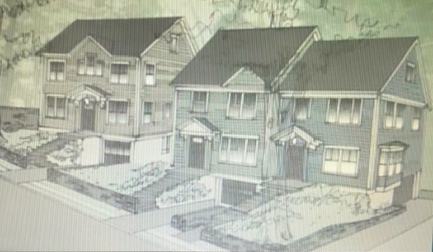 The public hearing on the proposed subdivision at 1 Sterling Ave., White Plains continued during the Nov. 19 Planning Board meeting.

At the reopening of the hearing, Planning Board chair John Ioris announced that the three-lot subdivision was fully zoning code compliant, setting the stage for discussion about the role of the Planning Board and the Common Council in determining policy regarding density and other zoning restrictions in the city.

Before residents were invited to the podium, a representative from Fusion Engineering explained that the developer had revisited the proposed design since the last hearing and had decided to return to a single curb cut for a driveway into and out of Lot 1.

Access to Lot 1, which is proposed to house a two-family structure, had caused much concern in the neighborhood and among Board members, as cars exiting at one of the driveways would have to back out onto one-way Orchard Pkwy.

The new plan provides one-driveway for access in and out and extends the parking area to enable cars to turn around.

The developer noted that more new trees would be added to the site to replace those being removed to allow for building and that the retaining wall had been studied, but no evidence could be found that it was moving. 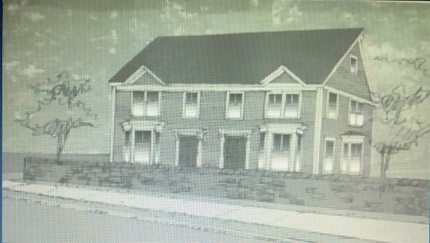 Architect’s rendering of second two-family house design, made to look like a single-family house.

Cracks in the grout and falling rocks above ground had caused concern, but the developer continued to claim the 120-year-old retaining wall remained structurally sound beneath the ground.

Several architectural design changes were also presented to show how the one single-family house and two two-family houses would have added design details and unique looks.

Michael Dalton, president of the Fisher Hill Association discussed a letter he had sent to the Planning Board regarding the neighborhood’s concerns about the proposed project.

“Many things have been addressed,” Dalton said, referring to the developer’s most recent design changes. “But, the fundamental issue has not been addressed. Density and appropriateness and compatibility in the neighborhood, that’s really what our issue is. We want a lower density.”

Dalton also noted that of the existing 28 large trees on the property, 17 will be removed.

Other residents speaking to the Board said they agreed with Dalton and that they would rather see only two houses on the site – not three lots with five residential units.

“Do the right thing,” they told the Board.

Ioris again noted that residents should direct their concerns to the agency that wrote the zoning law – the Common Council.

One resident asked if the houses would be available for sale or rental. The developer said he had not yet decided.

Gomez said there was little the Planning Board could do regarding any issue of appropriate zoning.

Olivia responded that a lot has changed in 30 years since the zoning code was written and that it might be a good idea to take a new look at the needs of the close-in neighborhoods of White Plains.

One resident commented that in the new residential market, young buyers were not interested in purchasing large houses on large pieces of property and that subdivisions might be the only way to keep the neighborhood alive with affordable housing.

The public hearing was adjourned to December. The Board is still waiting for the Environmental Review for the site from city staff.