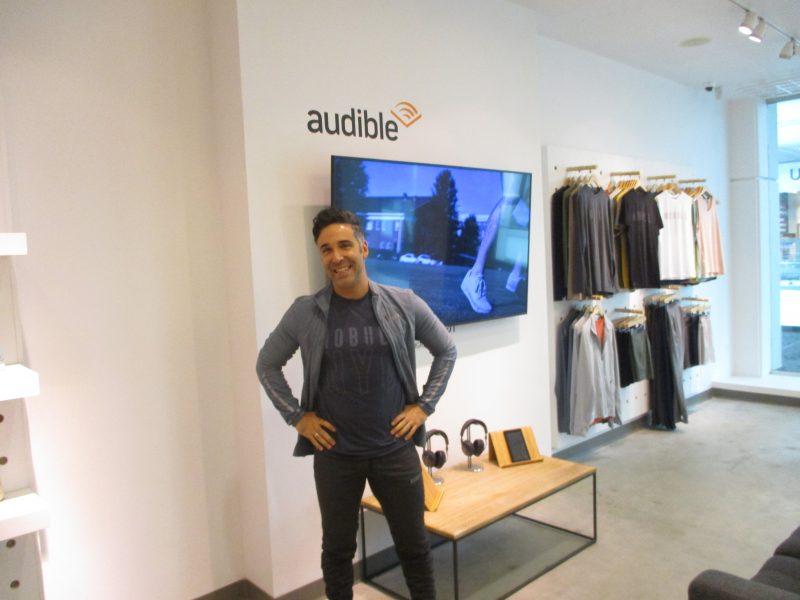 Brooklyn resident Louis Trombetta is store manager of  NOBULL in SoHo and is overseeing most of the development of other NOBULL stores nationwide, including the one that opened in The Westchester on Aug. 23.
Neal Rentz Photo

There’s not much guesswork in trying to figure out what the name NOBULL means for the recently opened shop at The Westchester in White Plains.

“The whole start of NOBULL was really just to have a fantastic fitness company that trims away all of the excess,” said Louis Trombetta, who manages the SoHo store on Prince Street in lower Manhattan and is overseeing much of the development of other NOBULL stores nationwide, including the new White Plains store, which opened on Aug. 23.

The company, which sells footwear, apparel and accessories mostly for teens and adults, looks to help its customers improve their personal growth, Trombetta said.

It offers clothing for cross training, including compression shorts, sports bras for women, tees and tank shirts and running shoes and shorts. The stores have recently introduced tee shirts for children.

“Doing these rigorous workouts, you do want your apparel to stay together,” Trombetta said. “You want it to wash well and you want it to react well to your training.”

Apparel should also keep a person cool or warm and dry, he said.

“You want the apparel and footwear to perform with you,” Trombetta added. “It won’t help you run faster. It won’t help you jump higher, but it will help you get to the next level in regards to doing what it exactly is supposed to do.”

He said for anyone who breaks a sweat, NOBULL’s merchandise would be for them.

Trombetta, who has worked in retail for about 18 years, said NOBULL had been eyeing a new store for White Plains.

“I knew White Plains was a wonderful community and when the opportunity to open a location in (a) Simon (mall) opened up we did want to test the waters and see how it would resonate,” he said.

Most of the new location’s customers live in the area, while some are Connecticut residents, Trombetta said. The company has its share of devout followers, many of whom were aware NOBULL was preparing to move into The Westchester well before the doors opened, he said.

“We hit the ground running,” Trombetta said. “Between the initiatives we have with marketing internally with Simon and then our NOBULL marketing, I think as the days and weeks go by, once the word is on the street, we’ll have a really positive reaction.”

“The people that have tried on our product and took a chance with us have been, happy to say, thoroughly rewarded in terms of the quality in the product and in terms of what you could actually accomplish while wearing the product,” he said. “We have very stringent tests in regards to quality control.”

NOBULL is located in The Westchester, located at 125 Westchester Ave. in White Plains. For more information call 914-406-4009 or visit https://www.simon.com/mall/the-westchester/stores/no-bull.