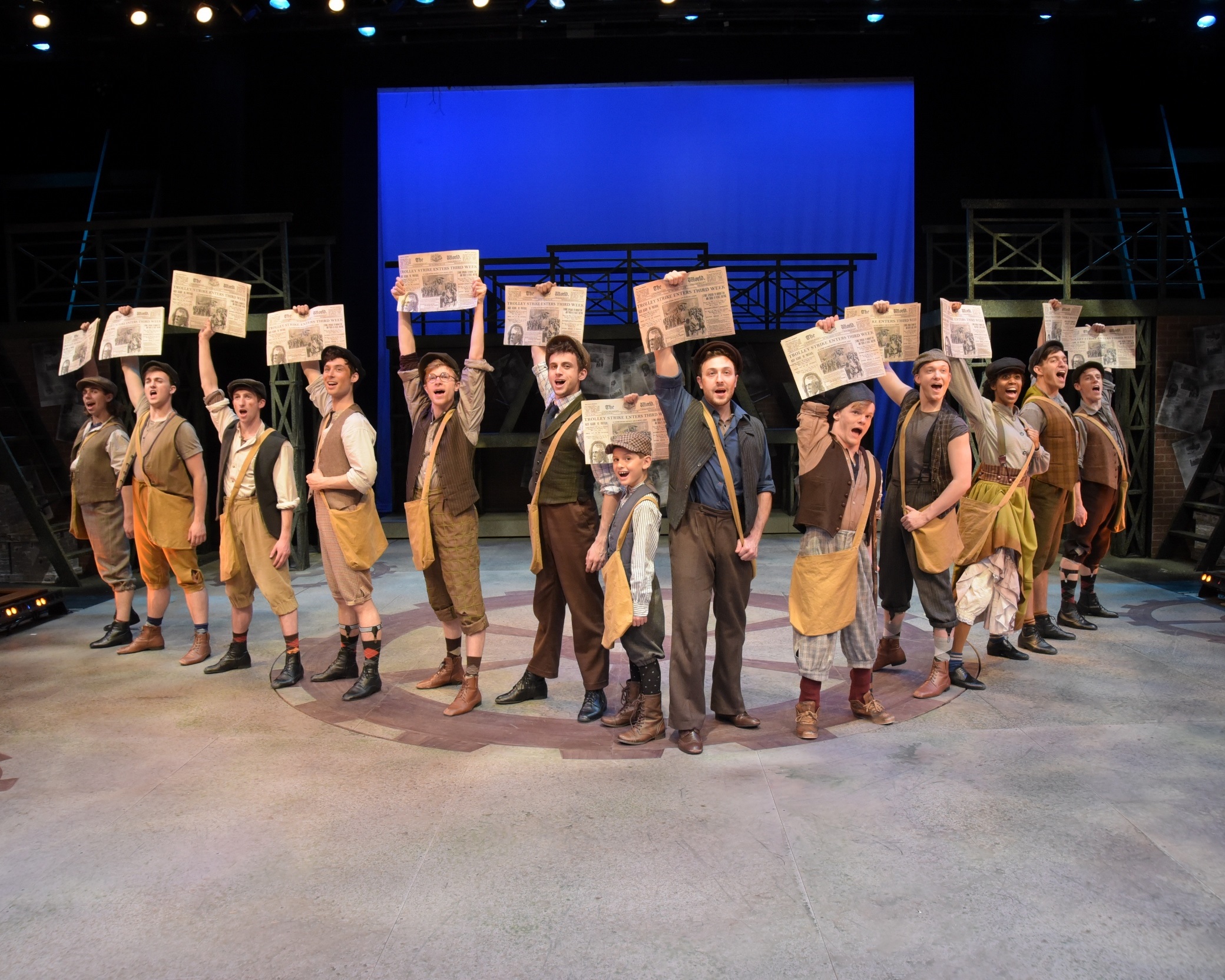 Part of the outstanding ensemble cast of “Newsies,” which can be seen at the Westchester Broadway Theatre in Elmsford now through May 26.

Celebrate the 110th production at the Westchester Broadway Theatre (WBT), “Newsies” is an exciting and entertaining addition to the long list of productions that have graced the stage.

It would be easy to bowled over by all that this production encompassed. Running now through May 26, this high-energy, engrossing, uplifting and lively production should not be missed.

It is based on the 1992 Disney movie about the real-life newsboy strike of 1899. Who could imagine a strike involving ragamuffin newsboys could be turned into an entertaining vehicle more than a century later?

Set in New York City, it is the rousing tale of Jack Kelly, a charismatic newsboy and leader of a ragged band of teenage “newsies” who dream of a better life far from the hardship of the streets. But when publishing titans Joseph Pulitzer and William Randolph Hearst raise distribution prices at the newsboys’ expense, Jack finds a cause to fight for and rallies newsies from across the city to strike for what’s right.

After receiving help from intrepid reporter Katherine Plumber, all of New York City soon recognizes the power of young people. With music by Alan Menken, lyrics by Jack Feldman and book by Harvey Fierstein, it was not surprising that the audience was treated to a fantastic evening of entertainment.

This production also had a large cast, with each of the talented actors singing and dancing their way into each scene with energy and acrobatics. The costumes, mannerisms and New York City street diction of the era were spot on as well.

Directed by Mark Martino with musical direction by Bob Bray, special recognition goes out to Shea Sullivan for the choreography. The entire ensemble was in sync throughout the entire evening. Whether it was tap or dancing with trash can covers on the feet – an old-time city kids practice – the numbers were remarkable.

The casting for WBT productions is routinely extraordinary and this production is no different. The audience is instantly drawn into the chemistry between the cast members. At the show’s conclusion, there was a rousing and enthusiastic standing ovation displaying the audience’s appreciation.

A special shout-out goes to Walton for his strong performance in song, dance and acting that carried the feeling of what the newsies were going through. He was strongly supported by Donohue and Tombs in his role as Crutchie, when he evoked heart-tugging emotion as the audience felt his pain during his solo as a young orphan restrained in a poorly-run city detention center.

With its short run, don’t wait to reserve your tickets for this show.

Westchester Broadway Theatre is located at 1 Broadway Plaza in Elmsford. Parking is free. Tickets for the show and dinner range from $59 to $89 each, plus tax, depending on which performance is chosen. Beverage service and gratuities are not included in the ticket price. Discounts are available for children, students and seniors at selected performances.

For reservations or more information, call 914-592-2222 or visit www.BroadwayTheatre.com.