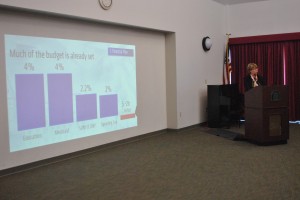 Joan McDonald, along with nine other New York State commissioners, traveled across the region to reinforce Cuomo’s plans for “a New New York”—each addressed issues and concerns voiced by county residents, most of which from Putnam were about infrastructure and library funding.

“As Gov. Cuomo mentioned in his budget address, we are doing more than just the budget. We’re talking about a reformed plan for the state of New York,” she said.

“Under Gov. Cuomo’s leadership, [the state] accomplished tax reform,” McDonald said. “We cut taxes for the first time in 58 years for the middle class.”

The budget, which begins on Apr. 1 of each year, leaves the state with a $2 million as Cuomo would like New York to stay within the parameters of 2 percent spending cap. McDonald said New York has taken on a new approach of “fiscal discipline” by creating private and public partnership, whereas private investments will help to boost state and federal aid for infrastructure projects.

The governor also issued an initiative to all of his commissioners to cut down on duplicate services throughout government. By consolidating some of the agencies, authorities, programs and commissions like the state’s 91 job training programs and 40 housing programs to essentially create less government, McDonald said the state can begin to cut administrative costs and executive compensation.

“We need to reevaluate the functions of government not only within our individual agencies, but across agencies,” McDonald said. “We need to streamline the number of agencies, board and commissions and the thousands of overlapping and duplicative programs so government can perform better and cut costs.”

Medicaid, which costs New York’s counties $8 billion per year, was the highlight of Cuomo’s mandate relief proposal, which calls for the state to take on this price tag in full over a three-year period.

“The counties in this state need relief. Gov. Cuomo’s proposal will phase in the takeover of the Medicaid growth for counties,” McDonald. “There will be a three-year phase in and the counties will eventually be held harmless and will pay for no Medicaid increases going forward.”

After her address, McDonald fielded questions from the 50 or so people that attended Friday’s presentation. Carmel Town Supervisor Ken Schmitt called for the need to bump up construction on Route 6 from 2020 to a sooner date.

“I’m just began my third term as town supervisor and during my first two terms in office one of the biggest complaints I’ve been hearing from the residents is the traffic and I know that the Department of Transportation has been examining the Route 6 corridor and it is on the radar for construction to begin in 2020,” Schmitt said. “I think we really need to look at pushing that up if at a possible because in order for economic growth to continue and build in our community, we really need our roadways to continue.”

David Gagliardi, one of Mahopac Library’s trustees, questioned the state’s contributions to libraries. If New York is so invested in reforming its education system, it must keep its libraries financially stable.

“Libraries do a tremendous service to the community, but that service has to be paid for and library costs are increasing,” Gagliardi said. “In good times, we don’t get increased and in bad times, we get cut. The governor has that 2 percent tax cap which makes it difficult to just pay for the needs to maintain this library.”