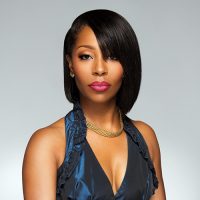 “The Bodyguard” made a film star of Whitney Houston and the 1992 film, which co-starred Kevin Costner, was a box office hit that earned over $400 million.

In December 2012, only months after Houston’s death, a musical stage version of the film opened in London.

The musical will be staged from April 26 through May 12 at the White Plains Performing Arts Center.

The star of the upcoming show is LaToya London, who was a finalist on “American Idol” in 2004.

White Plains resident Stephen Ferri, executive producer of WPPAC and music director of “The Bodyguard,” discussed the theater company and the upcoming show last week. “WPPAC is a gem in Westchester that provides the surrounding community with top quality entertainment,” he said. “From our professional Mainstage musicals featuring performers from Broadway and beyond, to our presented events of world renowned artists we have something for everyone to enjoy. We like to say it’s Broadway in your backyard. For a fraction of the price and a much easier commute, you get an evening of unforgettable entertainment.”

Ferri explained why WPPAC decided to stage “The Bodyguard.” “When we were picking our season, something WPPAC is most well-known for is our regional premieres,” Ferri said. “We like to have shows that you can only see here and it is something we have enjoyed being able to give to our audiences. “The Bodyguard” not only was a show that fit that category making this the first regional production in the US, but the music and movie are iconic which makes  for a great night of entertainment finishing off our 2018/19 season.”
Ferri said following its opening in Great Britain the musical was performed in Europe for a few years then went on tour. “This stays pretty true to the movie with a few twists to make it work better for stage,” he said “If you love the movie and Whitney Houston’s music, you won’t be disappointed.”

The play features all the songs from the original film, including Huston’s huge hit “I Will Always Love You” and “I Have Nothing,” as well as several other Huston hits, including “I Wanna Dance with Somebody,” “Run to You” and “Saving All My Love,” Ferri noted. “As we began rehearsal it was amazing to see truly how many hit songs she had as an artist over her career and how iconic these songs have become to people all over the world. There really isn’t a bad song in the show,” he said.

“The most challenging thing about this show is when taking any movie and translating it to stage, is that there are just certain things that are not possible to do live that you can do in a movie,” Ferri said. “However, we have done our best to make the show feel as cinematic as possible with the staging, projection and set design, while still keeping it true to being a live stage show. The other is when taking a title as memorable as ‘The Bodyguard’ which also features Houston’s biggest songs, the goal is to translate to the audience that this is in no way us trying to recreate those exact performances but pay tribute to them in our own way.”

Ferri explained why London was chosen for the female lead. “The role of Rachel is a marathon for any performer as she sings over a dozen Whitney songs in a two hour period,” he said. “We wanted someone who not only had the vocal ability to do those songs justice but also give an outstanding acting performance for a story as memorable as this. LaToya’s career path is very similar to that of the character she plays, which brings a whole other level of authenticity to the piece that you can’t teach to someone who hasn’t had those career milestones as she has. From ‘American Idol’ to numerous stage productions, LaToya commands the audience’s attention and gives you an unforgettable performance.”

London, who is from California, said, “I grew up listening to Whitney Houston since her debut 1985 (album). I loved her and still do, so it’s an honor to play her character in ‘The Bodyguard.’

London said the most challenging aspect of her performance is the dancing. “There are a lot of intricate parts. But I got this,” she said.

“It was a great experience. I learned so much about what goes on behind the scenes of a live television production,” she said. “I was very nervous because of the competition aspect but, I had fun, met great people and continue to do what I love because of the platform it provided.”