The band Melt has gained popularity with their hit song “Sour Candy,” which has amassed more than two million streams on Spotify and spawned multiple covers on YouTube. 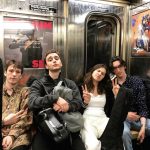 Members of Melt, which will be part of the lineup at Saturday’s Pleasantville Music Festival.

The six members of the band, who describe their music as pop-soul with jam influences, are musicians from New York City and Westchester, said vocalist and keyboardist Eric Dickstein. The band launched at about the end of their high school days just over two years ago.

“The singer (Veronica Stewart-Frommer) and I, we wanted to start a group together and through some friends and friends of friends, pulled together a bunch of people (who)…

“Became friends,” said drummer Josh Greenzeig, finishing Dickstein’s sentence. The band had such a great time making music together, that they’ve continued playing and performing despite being college students.

Greenzeig grew up in Chappaqua and has performed often throughout Westchester and has attended the Pleasantville Music Festival for many years. Bassist Lucas Saur is also a Westchester native, growing up in Dobbs Ferry. He said they’re excited to play where they’ve grown up and that the festival will be their first show together in the county.

Each member of Melt has different musical tastes that have shaped the way the band has evolved.

“What I think is great is that we come from different musical backgrounds and what I really love about playing in this group is that we’re all kind of able to pick what we like best from different genres and put them together,” Dickstein said.

Greenzeig said that within the jam perspective, some members are influenced by The Grateful Dead and that he is personally influenced by jazz. Since everyone in the band has different tastes, it’s hard to pinpoint a group of artists that have influenced them.

Stevie Wonder, The Meters from the old-school funk era and soul music have also played a role in developing their sound, Dickstein said.

Leading up to the festival, the band has been playing shows in Boston and New York City. Dickstein said its members are thrilled to be a part of Saturday’s festival. They are also trying to focus on spending time with one another and writing music to refine their sound before recording more music.

“We’re getting back in the studio about a week after the festival, which we’re really excited about,” Dickstein said. “We haven’t put out music in a while so we’re ready to get some more content out there.”

Melt is scheduled to perform at 2:20 p.m. on The Party Stage.