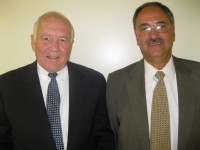 Mount Pleasant’s two town justices appealed to the town board last week for the addition of a third court officer once a metal detector is installed outside the courtroom.

Justices Nicholas Maselli Jr. and Robert Ponzini said once the equipment is in place a third officer would be needed. Currently, there are two court officers to provide security, with one devoted to protect the judge on duty. Court is held weekly on Tuesday and Thursday.

Even without a metal detector a third security officer would be useful since there is typically a lot of activity going on in the hallways when court is in session, Ponzini said. Additional security would also be helpful during civil proceedings. Parties are often asked to work out a settlement but those discussions can sometimes get heated, he said. Additional security is also necessary sometimes to keep defendants in line.

The town court handles up to 150 cases in a day, he said

Attorneys would avoid having to through the metal detector by showing their state-issued identification cards, Maselli said.

Last month, Supervisor Joan Maybury announced that Mount Pleasant had received a $4,000 grant from the state Office of Court Administration for the metal detector to help with security for the court, which is located inside the town hall complex in Valhalla.

While the two court officers cost the town about $10,000 a year, Ponzini said the court levies about $700,000 in fines annually, more than enough to offset the additional security. Most of that revenue is retained by the town, except for some serious traffic violations where a percentage goes to the state, he said. Fines for first-time non-violent offenders and minor violations are kept by the municipality, Ponzini said.

Maybury said the town board would consider a third court officer. There is no date scheduled for when the metal detector will be installed, although she said state personnel is scheduled to arrive in Mount Pleasant next month to help train the court officers how to operate the device.